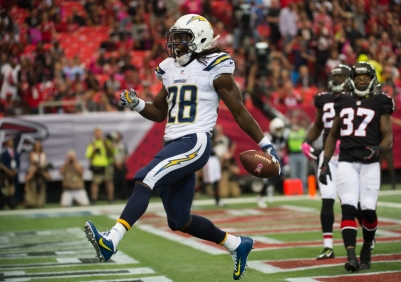 October 25, 2016 (Atlanta) - The Bolts traveled to Atlanta to take on the Falcons on Sunday.

The Chargers started the scoring right away in the first quarter with Melvin Gordon’s two yard touchdown run that put the Bolts up 7-0 after the PAT.

The Falcons got on the board with Matt Bryant’s 42-yard field goal attempt and the score was 7-3.  After an interception, the Falcons couldn’t do anything with it except another field goal that made the score 7-6 Chargers.

In the second, Josh Lambo gave the Bolts some breathing room with a field goal that gave them a 10-6 lead.  But the Falcons took everything away.  After a long completion to Julio Jones, Matt Ryan fired a bullet into the endzone to Jacob Tamme for a 17-yard touchdown pass.  Atlanta took a 13-10 lead.  They scored again as halfback Tevin Coleman got a big burst of speed and ran into the endzone after a good drive down the field.  20-10 Falcons.  Things just kept getting worse.  Deep in their own zone, Philip Rivers dropped back to pass and coughed up the ball.  It was recovered by Adrian Clayborne who took it in for the score.  27-10 Falcons.  The Chargers inched closer with Gordon’s second rushing touchdown that made the game a 10-point game, 27-17, at the half. 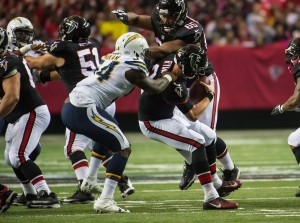 In the second half, the Chargers marched downfield, but couldn’t put it in the endzone, so Lambo came on again and kicked the field goal to make it a one-score game in the third, 27-20.

But in the fourth, the Falcons pulled further away with a Bryant field goal that got their lead back up to 10 at 30-20.  The Chargers narrowed the deficit to three when Rivers threw to Gordon at the goal line wide open for the score.  30-27 Falcons.  Even though the Chargers failed at getting the game-winning touchdown with seconds left in the fourth, they did force overtime with Lambo’s game-tying kick.

In overtime, after an impressive stand by the defense, Lambo made winning look easy with a field goal to give the Chargers a 33-30 win after coming back from 17 points down.

On Halloween Eve, the Chargers head to Denver for a rematch against the Broncos.  Kickoff is at 1:05 p.m.