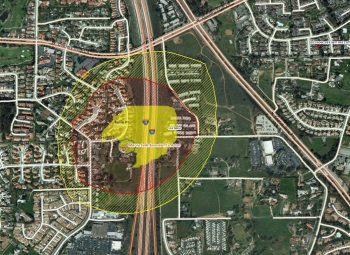 Some neighbors have been advised to evacuate and remove all furnishings and belongings, while others have been told to shelter in place. Weather permitting, destruction of the home is expected to occur between December 8 and 10.

County Emergency Services has set up a special webpage at http://www.sdcountyemergency.com/ displaying maps of the evacuation areas and shelter-in-place zones. Additional information will be added when dates are determined for destruction of the home. In addition, a Q&A session with area residents will be posted.

Those sheltering in place should keep windows and intake vents closed. Interstate 15 will be shut down during the operation.

With County Supervisors out of session due to the holidays, the Director of Emergency Services exerted his authority today and declared a state of emergency for San Diego County. Walt Ekard, Chief Administrative Officer for the County, signed a proclamation today requesting that Governor Arnold Schwarzenegger proclaim a state emergency--a move that would allow suspension of environmental laws for destruction of the home and any toxins that may be released.  “The Director finds that these emergency conditions are beyond the control of local resources, services, personnel, equipment and facilities,” Ekhard wrote.

Highly explosive, unstable materials create “extreme peril directly endangering persons and property within unincorporated and incorporated areas of the county and on Interstate Highway 15,” the proclamation declared. The home is located less than 100 yards east of I-15 and 500 yards north of El Norte Parkway, both heavily traveled routes.

The stash was discovered after a landscape worker was injured on November 18th after stepping on spilled explosive material in the home’s backyard. The Sheriff’s Bomb Arson Detail investigated and requested help from County HazMat crews. More than nine pounds of HMTD (hexamethylene triperoxide diamine), an explosive commonly used by terrorists and suicide bombers, were found, along with solvents, acids and precursors to explosives.

George Djura Jakubec, who rented the property, was arrested and charged on multiple counts related to the explosives as well as two bank robberies. He remains in jail with bail set at five million dollars.

According to a press statement issued by the Sheriff’s public affairs unit, “Due to the high quantity of hazardous materials, including some unidentifiable materials the danger to Sheriff’s personnel was so great that recovery of additional evidence was deemed an unreasonable risk and the recovery effort was halted.”

Those unidentifiable materials do not include any that are radioactive, Dr. Wilma Wooten, county public health officer, confirmed.

Area residents expressed fear and frustration. While some have praised officials’ actions, others have voiced worries that flames could spread to their residences or that families could be exposed to toxic fumes.

Document records list Michele Holt as the owner of the property.  Channel 8 News reports that Rod Lorang, the County's senior deputy general counsel, said the homeowner has been notified and will not be eligible for compensation from the county under emergency police powers granted by state law.  If the home is insured, depending on policy terms, the homeowner may be able to seek reimbursement from the insurance company.

County Supervisors must vote to approve the emergency declaration at their next meeting on December 7th in the County Administration Building downtown.  The public, including the homeowner, will be able to voice their concerns at that hearing.