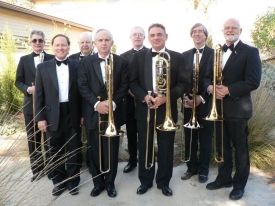 March 3, 2011 (La Mesa) – Robert Preston, as Professor Harold Hill, created a memorable musical moment in the movie “The Music Man,” parading 76 trombones, 110 cornets and other instruments through the streets of River City. Sliding forward in time, on March 6, 2011 at 6 p.m., the eight trombonists in San Diego’s own Bone-A-FieD Brass Ensemble will appear in a special concert followed by a “Mini-Mardi Gras Party” featuring Cajun hors d’oeuvres and more music.

The concert will feature movie and TV themes (Superman, Pink Panther…), marches, patriotic tunes and an original arrangement by conductor Gerry Kirk, which highlights the 15 most viewed TV westerns of all time, among them Gunsmoke, Bonanza, The Lone Ranger and Death Valley Days.

The Brass, a San Diego tradition since 1991, lists among its members four former school band directors, including Dean Hickman, San Diego’s 2003 “Teacher of the Year.”

All donations will benefit CBCC, a non-profit children’s center licensed for youngsters from six weeks to five years of age.

Childcare – and a special craft activity for children – will be provided. All are welcome.