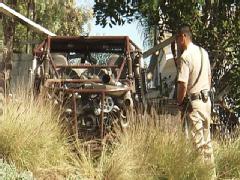 December 27, 2011 (Bonita) - A dune buggy accident has claimed the life of David Sylvester Metje, a 52-year-old married man from Bonita.  Metje was the driver and sole occupant of an off-road vehicle when he lost control and was ejected. The accident ccurred in the 4700 block of Butternut Hollow Lane in Bonita.

He was pronounced dead at the scene at noon today, after paramedics' efforts to resucitate him failed.