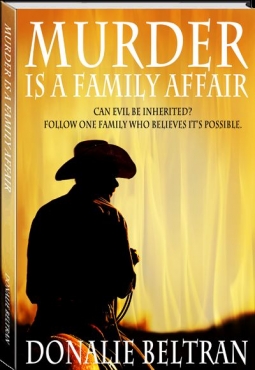 November 8, 2013 (San Diego)--Donalie Beltran, an author with strong religious convictions, has written an historical true crime novel that uncovers the ancestry of a sordid and evil past that belies her faith: Murder Is A Family Affair. The author sets the stage for this story and  the tone of this well-written novel by asking a rhetorical question: “Do you have a murderer in your family – maybe a violent tempered wife beater – those who feel they have a right to take a life?”

Some stories just have to be told and so it is with the Tuxhorn family. In preparing to write this book, Beltran spent years going through genealogy books, libraries, and websites. She accumulated printouts from original newspaper accounts, since the Tuxhorn history and family lore made headline and front-page news all over the country, particularly in regard to the horrific crimes of August and Charles Tuxhorn. 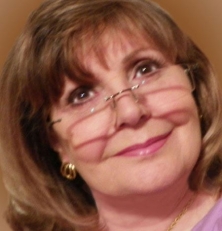 The author (photo, right) started researching her father’s ancestry in 1995 when he told her about a rumor he had heard when he was a child. It concerned a Tuxhorn relative being a killer. The adults wouldn’t discuss it and he didn’t know any details. Out of curiosity, Beltran  sought to find out about this terrible person. Not having online genealogy sites at that time, she drove to the McPherson County, Kansas Courthouse to investigate.

Giving herself a few years leeway, she searched the micro-fiche for the Tuxhorn name. Finding the crime her father had heard about was easy. The problem was the name kept reappearing – and reappearing. It seems that a previous generation had also made headline news – and a generation before that. Research continued for 10 years and what the author found was a family propensity for violence and murder. Not just one – but many. Violent tempers and uncontrollable rage appeared to be the norm.

Were they born to be bad – can evil be inherited? It took years for Beltran to write the book, but the truth hidden from her father is finally in the light for all to see. 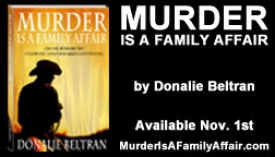 Murder Is A Family Affair follows August Tuxhorn to America in the 1850s, where his son, Charles, was born in Illinois. The young Charles grew up with a handsome face and a stone cold heart. With evil set in motion by his grandfather and then by his father, Charles carries on the family’s violent temper and disregard for human life. Did he inherit these traits shared by others? More importantly, did he pass them on?

The Tuxhorn family legacy for this story started with H. “Henry” Tuxhorn, who lived in the small farming hamlet of Bielefeld in Westphalia, Prussia.--until he decided to take his old shotgun and put it to use one more time. Alone in his field, he sat down on a rock and tied a string to the shotgun’s trigger. He then put the barrel under his chin and pulled the string. It was a less than dignified, albeit speedy, way to die. It was almost immediately after the funeral that August, his son, would leave for America, and continue this history and legacy of violence started by his father. In one of the strangest twists of fate and irony, August would later die in the same way, the “shotgun under the chin” method.

What is amazing about this book is that the author seems to exhibit little shame in airing her ancestral family’s dirty laundry. Perhaps it is therapeutic not to, or she is just numb from some of the particularly gruesome murders that she talks about in this family tragedy.

August’s children hid in the bushes and witnessed him burn down their family home and the barn with the horses inside, and then put the shotgun to his neck, blowing his head off. This would be traumatic to the strongest of minds. That is enough to cause the severe depression and anger among the grandchildren and great-grandchildren that Beltran speaks of in the epilogue of this scintillating, and at times disturbing true crime novel.

Although the title is Murder Is A Family Affair, it would better seem to be titled the Personification of Evil, as the murders in the book that the author alludes to is a by-product of evil.

Beltran’s incisive and well-written book about a tragic and sordid family history has gotten me to thinking more and more about my own family tree and its legacy, as I am sure it will with other readers, which is why I highly recommend it. Who knows what will happen or  be revealed when you search your own family tree?

Dennis Moore is a writer and book reviewer with the East County Magazine in San Diego and the book review editor for SDWriteway, an online newsletter for writers in San Diego, as well as a freelance contributor to EURweb based out of Los Angeles. He is also the author of a book about Chicago politics: “The City That Works: Power, Politics and Corruption in Chicago.” Mr. Moore can be contacted at contractsagency@gmail.com or you can follow him on Twitter at @DennisMoore8.

I feel honored to have written the review of this book by Donalie Beltran.

The good news is that "Murder is a Family Affair" has eight 5 star reviews as of today, as indicated to me by the author Donalie Beltran, and readers are encouraging her by indicating that the book should be made into a movie. I wholeheartedly agree!

Sounds like a great read . I have to get mines . Like always Dennis reviews are very interesting and always love to read what he writes. Good Work !

I am Author Joyce Reed here to help so many people on so many different levels. I really have a story to tell and share with you .If you can just take 2 minutes to read and review the attachments , you may never know who it could help. It may even HELP you.

My purpose is to spread my story and help as many people as I can. I am a Author who has a story that needs to be told.

It is a very POWERFUL book , if you don't believe me then just read the reviews.

Check out my Videos and see exactly what " Hurt Used To Live here " is all about , click on the link below to view my you tube video:

My Life, My Story, My Journey -
http://youtu.be/3RgjQOC7HHA

He will NEVER leave you NOR FORSAKE you !!!

This looks like a really exciting book. I will go to Amazon to pick up a copy and I can't wait to read it. As always, Dennis Moore has done a wondeful job of showcasing the author and the author's work.

This looks like a really exciting book. I will go to Amazon to pick up a copy and I can't wait to read it. As always, Dennis Moore has done a wondeful job of showcasing the author and the author's work.

This is definitely a book that has made  people want to comment. It is a story that has been buried in my family background for way too long. Thank you, Dennis, for your thoughts and review. It is definitely a haunting legacy.

This is definitely a book that has made  people want to comment. It is a story that has been buried in my family background for way too long. Thank you, Dennis, for your thoughts and review. It is definitely a haunting legacy.

Having been given the honor of writing the review of this spellbinding book by the author,  Donalie Beltran, there is still a passage in the book that resonates with me; "Of course, there was no explanation for Henry's actions. It was not like he was going to tell anyone, and how could she know the devil's own thoughts? Even after being married to him for twenty-eight years, she was as shocked as anyone. But there was that silver lining, now wasb't there? She was free from the beatings and her children were now safe."