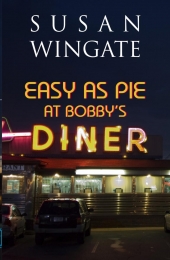 April 12, 2010 (San Diego)--If ever the expression, “Love is Blind,” would apply, it would be in the book by Susan Wingate, Easy As Pie at Bobby’s Diner. Georgette Carlisle, the owner of Bobby’s Diner in Sunnydale, Arizona, falls hard for Hawthorne Biggs, and basically everything he tells her. But it turns out that Hawthorne, whom Georgette is engaged to marry, has been leading a clandestine life of murder and corruption, unbeknownst to her. He conspires with others to steal the diner from Georgette, while love blinds her to his true intentions.

In the second book of the four-part Bobby’s Diner series, Easy As Pie at Bobby’s Diner, Georgette invites an old girlfriend back into her life, which imperils her ownership of the diner and her relationship with her fiancé. Georgette invites Helen to move in with her. Georgette’s old girlfriend, Helen, was always cloaked in something, always scheming, but true friendship has a tendency to overlook such faults. Georgette is an understanding and forgiving sort, not faulting Helen for trying so long ago to take her late husband Bobby from her. Georgette could afford to be understanding, as she and Bobby had pulled something similar with Bobby’s first wife, Vanessa.

Set in the Arizona desert, Easy As Pie at Bobby’s Diner could be described as a meeting between the Whistle Stop Café and the ladies from the No. 1 Ladies Detective Agency, with all the similar elements of mystery and intrigue. Of course, it is a love story also, with all the elements of amorous behavior and innuendo! It has the playful interaction between men and women in those expressions of love between each other, which, coupled with the mystery and intrigue throughout the book, makes for a captivating story. The book is also a tale of betrayal, kidnapping, sexual assault, rape and murder. Easy As Pie at Bobby’s Diner, will find its home with women who like mysteries and exciting entanglements between men and women. It has elem

ents of a Hitchcock film.

The way the author describes the various scenes and situations in the book, from the setting of the desert sun to the objects in Georgette’s home and diner, makes the reader feel as if they were actually in the scenes.

Other key characters in this book are Roberta, the town Mayor and daughter of Georgette’s deceased former husband, Bobby (whom the diner is named after), along with Willard (Willy) Cleary, the Police Chief of Sunnydale, who is also the first guy that Georgette dated after Bobby died. Although the dating between Georgette and Willy is short-lived due to Hawthorne coming into the picture, it adds to the mystery and intrigue. Georgette’s cat, “Gangster,” also has a central role in the story. Georgette actually runs Bobby’s Diner with Roberta, the Mayor of Sunnydale, and Bobby’s daughter. Since Roberta’s mother, Vanessa, had also died shortly after her father, Georgette attempts to supplant that role. Georgette and Roberta are more like best friends than mother and daughter.

When an old friend, Helen, comes back into town after a failed attempt at a writing career, she is once again attracted to Georgette’s man. After they part company over this latest betrayal, Helen goes missing. Georgette and Roberta set off to find her, braving separation, danger and a new strength in their relationship – one that empowers them separately but bonds them together. Of course, it has a satisfying ending for Georgette and Roberta, but one has to read the book to find out what happens to Helen and Hawthorne, as well as the various other characters in this book.

I strongly recommend this novel to all those that like a good mystery, sprinkled with danger and intrigue.

Not only is Dennis Moore a fabulous review and author, he's an outstanding talk show guest. With Joshua Graham and Terri Ann Armstrong at the helm, Dennis Moore spent a lovely hour chatting on DIALOGUE: BETWEEN THE LINES. Hearing that it was a smash success, I'm heading over to listen in just a few.

But, Dennis is one of these people who you meet and think, "Wow. What a wonderful person. He's a giver, and a kind and thoughtful man who happens to love reading and writing." And, aren't we lucky for it.

Dennis, thank you again. I have a feeling this won't be the last time I'll be saying that to you.
Bests, Susan Wingate.

I was honored to be a guest on Susan Wingate's internet radio show for writers this past Thursday, which is co-hosted by Joshua Graham (Beyond Justice). Although on a much-deserved vacation, Terri Anne Armstrong of Suspense Magazine ably filled in for Susan. Terri Anne complement Joshua Graham in this great show, in which they both made me comfortable in our exchange of information regarding my book, "The City That Works," along with the many book reviews that I write for the East County Magazine, SDWriteway, and the San Diego Union-Tribune Newspaper. Joshua Graham and Terri Anne, also talked about their books, and afterwards, Terri Anne sent me her latest book(s) for review. I also had the pleasure of announcing on the show, that Joshua Graham will be one of the participants in an Authors Event at Barnes & Noble - Grossmont, on April 9th, arranged by me, in which he, TJ Johnson and Max Sturman, are scheduled to discuss how to get published, along with selling their books. This is a unique situation and opportunity for authors in Southern California, for depending on how this inaugural Authors Event goes, will determine if it will be ongoing for other authors in the area. The beauty of this arrangement is, that the authors get to keep all of the proceeds from the sales of their books at this event, while sharing their knowledge and expertise with other aspiring authors. I am thankful that the Community Relations Manager at Barnes & Noble - Grossmont approached me a couple of months ago with this novel idea and concept. I immediately thought of Joshua Graham, TJ Johnson, and Max Sturman to be participants in this event. Again, I want to thank Susan Wingate and Joshua Graham, for inviting me to be a guest on their internet radio show, which does so much for the writing profession.

Susan, of course! I would be honored to appear on your show, DIALOGUE, with two of my favorite authors, you and Joshua Graham. Just say when!

Of Course! Joshua and I sure hope Dennis Moore will agree to be on our talk radio show, "DIALOGUE: Between the Lines with Susan Wingate & Joshua Graham," that promotes and encourages up-and-coming authors. We host many different people from the publishing industry. We lean toward writers but have agents, publishers, publicists and other professionals as well. We would love it if Dennis Moore would be on our show, say, sometime in March? -Susan :)

I love reading Dennis Moore reviews. He makes the books become real to the reader. This book seems like it full of drama, which I like. I feel that this book will be a great read to curl up in a chair with a cup of hot tea and get losted in. Susan Wingate, I will be going to your website to learn more about you and your books. Sheila L. Jackson, author of "The Enemy Within," and "Through The Eyes of God." www.sheilaljackson2.com, SJ@comcast.net,
http://www.facebook.com/home.php?#!/sheilalj

Once again, Dennis Moore comes up with a fabulous idea! He has allowed me to promote our new venture called DIALOGUE: BETWEEN THE LINES WITH SUSAN WINGATE & JOSHUA GRAHAM. DIALOGUE is a radio talk show that promotes writers at every level of their careers. As the hosts, we want to learn about you, where you are in your career, your hopes and dreams and even your disappointments. Just click on the following link and you'll be directed to the site for the show.

Airing every single Thursday at 10 a.m. PST, you'll get live radio the way it's intended... raw and exciting. We hope you will join us. Plus, we hope to feature book reviewer of East County Magazine, Dennis Moore sometime soon. Thanks for allowing me this bit of promotional leeway. -Susan

The credit really should go to Susan Wingate and Joshua Graham. I think that it is fantastic that they are collaborating to use the medium of internet radio to promote themselves, their books, and other authors. I feel honored to have written the reviews for their respective books, and look forward to being on their show. They both are very talented writers.

Dialogue: Between the Lines with Susan Wingate & Joshua Graham.

Very great book, I always enjoy coming back to this blog for posts like this ...
www. Top-Poker.fr

Yes, this really is a great book, and I had the pleasure to write the review for it.

Wow. Dennis. Thank you for this lovely review. You know, writers bite their nails awaiting reviews. Sometimes we want to bite our fingers too! Not today. Your words have put a permanent smile on my face. I'm so very please you enjoyed the story. Thank you, from the bottom of my heart! -Susan Wingate.

Susan, I want to thank you for giving me the opportunity to do this book review. It is am absolutely gifted work on your part, of storytelling. As I had stated to you earlier, Georgette and Hawthorne still resonates in my mind. A movie should be made out of this book, with me now wondering who might play the parts of Georgette and Hawthorne, along with the roles for Helen, Roberta and Willy. I feel honored to be considered as a part of the success of this great story. Please, take it to higher levels. I only have one thing to ask of you, if, and when, you are making your acceptance speech at the Academy Award or Emmy nomination, please invite me. Again, great job!

Consider yourself invited. What sweet words. Thank you from the bottom of my heart. For once (ask my husband), I don't know what to say. Sincerely, Susan.

She is a great author and I hope to read more from her in the future. Thank you so much for sharing your review and I hope that we can get more of your opinions as well. Bobby's Diner will be known for a long time.

The casino en ligne games here will keep you gambling and winning lots of casino cash and I know I will visit this casino again.

Michael, thank you for the kind words. I enjoyed reading and writing this book review, from cover to cover.

Hello Michael!
Thank you so much for your comment. It's an honor to have people read your work and quite a thrill to have people like it as well. So, thank you again for your words. I'm awestruck. -Susan Wingate.