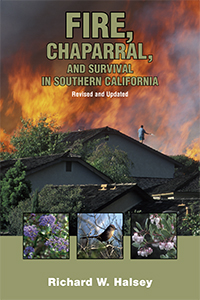 “The Viejas fire in ’01, the Galivan fire in ’02, and then again during the Cedar fire in ’03. It’s always the same damn thing.” -- A weary incident commander back on the fire line

It is fire season. And with it, the specter of a firestorm again hovers over the West. The flames will come – only the where and the when are unknown. For that reason alone, this guide to survival deserves a space on the bookshelf of every Southland family.

Reader friendly, absorbing and of immediate utility for East County residents, the book resists easy classification. It is at once a field guide to chaparral habitat, a platform for more enlightened wildlands and wildfire management, and a homeowner’s guide to greater security from the fires that with distressing regularity paint large expanses of the golden state with ash. 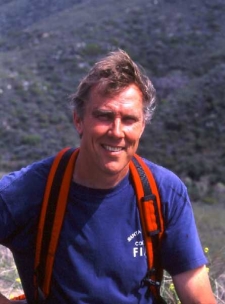 A noted San Diego biologist, award-winning teacher and favorite lecturer at the Natural History Museum in Balboa Park, Rick Halsey brings three decades of study and field research to his subject. An experienced wildland firefighter himself, the author consults with many regional law enforcement, environmental and land management agencies. With that résumé, he is uniquely prepared to interpret both what happens when fire sweeps the hills and what ought not to happen when the public policy brouhahas erupt before the embers are cold. (For Halsey’s continuing work on chaparral visit www.californiachaparral.org)

Halsey weaves his story from many threads – allowing each its own voice. This was a wise decision. The book’s 21 contributors lend expertise, human interest and narrative energy. The combination infuses the text with authenticity. The first-hand accounts of an able roster of scientists, emergency crewmembers, wildlands residents and eye witnesses to tragedy bring much-needed clarity to complex and thorny questions in natural history and public safety administration.

The adhesive that binds all this together is Halsey’s vision for a different way into our common future. His message is simple, but eloquent: “A thorough and honest understanding of natural history is crucial if we want to preserve the quality of life we enjoy today.” The prerequisite for such understanding is a greater number of fire literate citizens. This book is designed to be their primer.

Along the way, Halsey and his contributors engage and effectively debunk a number of prevalent myths about wildland fires. Marshalling his evidence, Halsey argues that chaparral is not adapted for fire, per se, nor is it a fire-dependent natural system; old-growth chaparral is a healthy, dynamic environment and is not choking San Diego hillsides with “overgrown” brush; fire suppression over the years has not led to an “unnatural” accumulation of chaparral, fueling ever larger fires; and wildland fires can not be extinguished by aerial drops of water or fire retardant alone. These findings should make their way into public awareness and subsequent debate on fire safety policies.

Readers familiar with the first edition will wonder what’s new here. Actually, quite a lot. The revisions and additions are well worth a look. Among the most notable are a new 16-page introductory essay addressing questions such as “Why do homes burn?” The updates to Chapter 4 enhance the “Getting Ready” story with lessons learned from the region’s devastating fires in 2007. A new contribution from Mike Evans of the Tree of Life native plant nursery gives the “What to do after a fire” chapter a wholly different perspective, while the vivid new end covers provide detailed perimeter maps showing all the fires in Southern California, from 1900 through 2007. Throughout, the updated text benefits from an array of helpful new ink illustrations, complemented by a selection of full color plates.

All of that makes this edition the most thorough and most accessible book currently available on California’s most extensive wildlands habitat, the chaparral. More importantly, it is a level-headed guide to living with and within that habitat. East County residents – and others who drive east on I-8, west on Highway 52, or north on I-15 – will not look out over the chaparral-cloaked hills in quite the same way again. Nor are they likely to be indifferent to the parched and weedy grasslands that have replaced chaparral in all too many places.

Last year, Sunbelt Publications garnered best-in-class recognition at the San Diego Book Awards for this book. Rightly so. The production values are high, the color plates sharp and the text is loaded with consequence. Second District Supervisor Diane Jacobs recently noted that the County, all local jurisdictions combined, spends about $450 million annually on structural fire protection and emergency services. Wildfire is a perennial issue that touches every resident in the County.

This is a reflective book; some passages recall the work of Muir, Aldo Leopold and other American pathfinders. The author’s deep connection with the wildlands informs every page. But it is also an unmistakable call to action. Halsey’s ultimate concerns are for the safety of our citizens – and especially those we ask to go into harm’s way when disaster strikes - and for the integrity of Southern California’s frequently misunderstood environment.

The passion in Halsey’s message comes from the increasing frequency of Southland fires in recent years as well as our often ham-fisted response to them. The double-punch makes the recovery of native chaparral habitats ever harder. We are only beginning to comprehend the multiple long-term consequences of the loss.

Halsey proposes a fundamental shift in how we think about our relationship to the land we live in. Instead of mastering or subduing the natural landscape, the emphasis would be better placed on fireproofing those communities perched on the intersection of urban and wild landscapes. An approach that stresses living with, rather than imposing upon, nature’s timeless cycles would be less expensive, more sustainable over time and far less likely to end in tragedy.

Such a shift is not beyond our grasp. The urgency of it is telegraphed in chapter or section headings such as “Getting ready for the next one.” Halsey distills the essentials into a wildlands fire safety triad: greater wisdom (and restraint) in selecting locations for building; designs appropriate to the level of risk; and maintenance of survivable or defensible space. By addressing theses challenges from the house outward, instead of inward from the hillside, Halsey recasts both our thinking and our priorities.

Despite the sensational aspects of his topic, Halsey is not an alarmist. Nor does he dwell on the disheartening stories, such as the fate of San Diego’s vanishing vernal pools. Admirably, he steers well clear of pessimism. Instead, he has given us a concerned, but still hopeful book. If we just take the time, he seems to say, we can get this relationship right. Why not do that?

Read this book; share it with family, neighbors and friends - so that next time, and Halsey’s contributors all make it clear that there will be a next time, it won’t be “the same damn thing.”

***
Walter Hall is the pseudonym of a La Mesa-based national security analyst and defense strategist, with experience in interagency emergency planning.