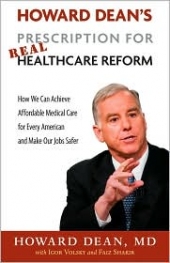 The free market just doesn’t work in medicine. You can’t be an informed consumer. I never saw someone with severe chest pain jump off the table and say, Doctor, I’m going to the cheaper guy down the street.” -- Howard Dean. M.D. , on a recent book tour in San Diego

August 16, 2009 (San Diego) –I first became intrigued to read this book when a conservative Republican hospital board member in East County confided, “I hate to admit it, but the healthcare reform plan that makes the most sense to me is Howard Dean’s.” Dean visited San Diego on a book signing tour last month, where he spoke about his book and fielded questions from the audience—providing scalpel-sharp responses.

Dean, former Democratic presidential candidate and ex-Governor of Vermont, is also a medical doctor who provides an in-depth diagnosis of what ails our healthcare system. His book also provides a detailed history and comparison of public healthcare options in other countries, as well as a spirited argument in favor of a public option that would give Americans a choice between public and private health insurance. 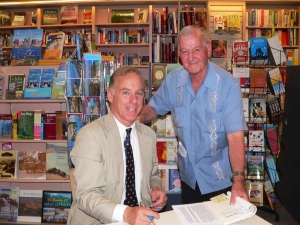 “A public option would be an incentive for private insurers to improve,” Dean said during an appearance at Warwick’s Books in La Jolla. “I do not want to see a trillion dollars put into healthcare reform without a public option.”

The plain-spoken physician offered this blunt assessment of why a public option is needed. “The free market just doesn’t work in medicine,” he said. “You can’t be an informed consumer. I never saw someone with severe chest pain jump off the table and say, Doctor, I’m going to the cheaper guy down the street.”

Dean noted that public healthcare in Europe was established not by liberals, but was in fact championed by conservative statesman Winston Churchill. “Disease must be attacked, whether it occurs in the poorest or the richest man or woman simply on the ground that it is the enemy; and it must be attacked just in the same way as the fire brigade will give its full assistance to the humblest cottage as readily as to the most important mansion,” Churchill once stated.” Our policy is to create a national health service in order to ensure that everybody in the country, irrespective of means, age, sex, or occupation, shall have equal opportunities to benefit from the best and most up-to-date medical and allied services available.”

Cost savings would occur by moving to a wellness-based medical model that emphasizes prevention, lowering current costs for treating patients who wait and go to the emergency room in a crisis. Eliminating administrative overhead would also save money in a public option.

Dean views the healthcare crisis as an integral part of the economic crisis.

“To fix the economy, we need to begin by fixing our healthcare system,” his book states, noting that General Motors spends more on healthcare insurance for workers than on steel to build automobiles. He cites a Kaiser Family Foundation survey which found that 58% of all small businesses have difficulty keeping up with healthcare costs.

“If you want to help small businesses,” he argues, “let them pay lower health insurance premiums.”

Dean has practiced what he preaches. As Governor of Vermont, he led the state’s expansion of Medicaid eligibility to children under 18 in families earning under $65,000. “Basically we made Medicaid a Middle Class entitlement for children,” he says, adding that the shift saved businesses money and increased profit margins for those that opted to have employees’ children covered by the public plan. Vermont also increased Medicaid reimbursements to assure that doctors would not opt out of the system.

Now Dr. Dean wants to essentially expand Medicaid to give Americans under age 65 the option of the same coverage that older Americans can now receive through Medicaid. No one would be forced to give up private insurance if they choose to keep it. “Americans ought to be able to decide for themselves: Is private health insurance really health insurance? Or is it simply an extension of the things that have been happening on Wall Street over the past five to ten years, in which private corporations find yet new and ingenious ways of taking money from ordinary citizens without giving them the services they’ve paid for?”

Dean points to the facts: 47 million Americans have no health insurance and an estimated 25 million more working Americans who do have health insurance still can’t afford to see a doctor, going without recommended treatments, tests or prescriptions. “Their stories are heart rending and it’s a scandal that in the wealthiest nation on earth, we cannot adequately cover everybody,” Dean states in his book.

Dean dispells myths promoted by the healthcare industry. “There is no country in the world with a public option that doesn’t also have private insurance,” he noted. “A public option allows you to sign up for Medicaid before 65. All the Republicans who’ve been whining and complaining all have a public system,” said Dean, former head of the Democratic National Committee, citing the high-quality government healthcare program that Congress has given its own members. Moreover, satisfaction ratings are high for two other government healthcare programs: Medicaid and Veterans Administration (V.A.) healthcare, Dean noted. 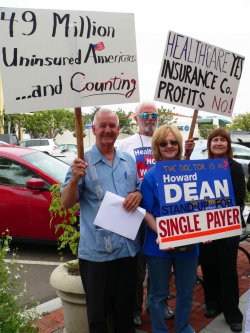 He believes true healthcare reform must include five core principles. Everyone must have the option of coverage. No one should be forced to declare bankruptcy because of medical bills. Health insurance should be portable, meaning you can’t lose your health insurance even if you change jobs, move, retire or have a pre-existing condition. Plus the quality and efficiency of care must be improved.

Demonstrators who support a single-payer system that would mandate government healthcare for all spoke with Dean during his San Diego appearance. Floyd Morrow, former San Diego Mayoral candidate, presented Dean with a petition calling for adoption of a single-payer healthcare system (photos). (Editor's note: Unlike some recent townhall forums, Dean's appearance did not attract any anti-healthcare reform protestors.)

“My bottom line is not single-payer,” he said, noting that most Americans like to have choices. But he added that supporters of single payer should continue to lobby their legislators to prevent healthcare reform in Congress from being watered down to remove a public option. “Public option is the compromise,” he noted.

Dean noted that all countries in Europe now have a public option, except Switzerland and Netherland, where insurance companies are tightly regulated similar to public utilities. Americans spend more on healthcare per capita than any other nation, yet the U.S. ranks dead last in ratings of healthcare quality, access and affordability.

As for why the insurance industry is so opposed to a public option, Dean concluded, “Insurance companies know that if the American people had a choice, they will migrate to the public plan—and that’s why they hate this.”

Dean ended his talk in San Diego with a dose of political organizing, urging citizens to contact their legislators and urge support for a public option.

“You need to fight like hell so this isn’t taken off the table,” the doctor-turned political activist and author prescribed.

Miriam Raftery, editor of East County Magazine, has covered healthcare issues for many years as former contributing editor of a national nutrition  publication and political reporter for numerous publications.