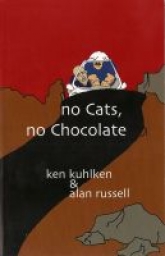 Even as book defies the odds by climbing higher on the Amazon bestseller list, the authors take perverse pride in touting wretched reviews such as these printed on the opening pages:

“There are few subjects on which the scientific community is in agreement, and the science fiction community is just as fractious. However, when it comes to Russell and Kuhlken we all concur: We hope they faill into a wormhole, end up on the other side of a distant galaxy, and are never heard from again!” --  David Brin, bestselling author of The Postman.

“On my Top Ten List! My biggest regret in retiring from the FBI is that I can’t put these two jokers behind bars. Kuhlken and Russell’s No Cats, No Chocolate, is the latest of many frauds they’ve perpetuated on an unsuspecting American public. I wouldn’t be surprised if one day a lynch mob stormed one of their signings, and neither would I be surprised if law enforcement turned a blind eye to the people’s justice.” – Gene Riehl, bestselling author of Quantico Rules.

Clutching my cat while savoring a box of chocolates, I hunkered down in a comfy chair and embarked on reading this road trip to riches or ruin.

No Cats, No Chocolate presumably derives its title from the authors’ resolve not to pander to audiences seeking fluff, though  they deem penning passionate prose under pseudonyms acceptable for a price. (They still have some standards.)

If you’re looking for sensitive writing and a sensuous romance plot with multi-dimensional characters, don’t read this book.  Kuhlken and Russell relish bad clichés as they set out on a rollicking ride, vying to see who can complete the task of finishing a romance novel first.  Their outlandish plot breaks seemingly every rule of romance writing including raping the heroine,  yet miraculously manages to  win the editor’s approval.

Feigning passion as they pump out prose about two hearts—actually three—beating as one, the authors’ do exhibit genuine feelings as they parry a barrage of insults back and forth.

(Those insults extend even into penning each others’ bios. Of Kuhlken, whose first book, Midheaven, was nominated for the Ernest Hemmingway Award, Russell claims the nomination was made because Kuhlken "paid out substantial bribe money.”  Kuhlken, in turn,  offers this advice regarding Russell: “Booksellers, collectors and mystery fans should rush out and buy copies of Alan’s work before he does something that makes him so infamous the value skyrockets or a decency committee buys and burns all his available books in protest.”)

From San Diego’s suburbs to a Chicago jail cell, the authors embark on a fast-paced series of misadventures, finding unexpected curves along the way as they seek to escape their dead-end career path in No Cats, No Chocolate.

“Why?” Russell quips. “Everyone loves stories of how the mighty have fallen.”  He then points out that Oprah devoted entire shows to Bridges of Madison County.

“I want your promise that you won’t say anything,” Kulkhen insists. “You are not going to embarrass me on national television.”

Russell deadpans, “I count on you doing that yourself.”

You’ll have to read for yourself to find out the ironic end to their quest for fortune if not fame, though suffice to say that these crafty and mercenary authors have left ample room for a sequel in the future.

If you’re seeking a high-brow literary work of the quality Kuhlken penned in Midheaven to earn a Hemmingway nomination, don’t read this book.

If you’re looking for a light-hearted read while living vicariously through a pair of irascible characters on a road trip with bizarre twists, then this is the book for you.

Warning: this series is not over; watch for And No Damn Recipes hitting bookstore shelves soon.