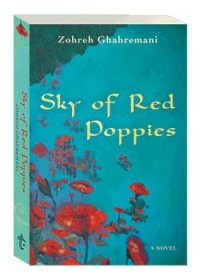 August 16, 2014 (San Diego)--Zohreh Ghahremani, an artist, writer and gardener residing in the San Diego area, has written a stunning and poetic tale about two girls coming of age in Iran during the 1960s. The theme of the book questions how much can a friendship change your life? Set against the backdrop of a nation forced to mute its profound identity, Sky of Red Poppies is a novel about culture, politics and the redeeming power of friendships.

This book takes us on a fascinating journey through the landscapes of Iran, providing a glimpse into a far too often overlooked side of Iranian culture and history. 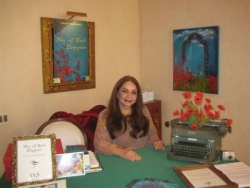 The central characters in Ghahremani's book are two schoolgirls from different sides of the track in Iranian culture and society, but with an undying love and respect for each other's differences.

Roya Afshar, born of an affluent family in Iran, at 16, was curious about many things, but the activities of the Shah's secret police weren't among them. That would serve her well up until her graduation from high school. By contrast, her friend from the other side of the track, Shireen Payan, had more of a questioning and defiant approach to the Shah's reign. Perhaps, Payan's Muslim faith and practices contributed to this defiance, along with her high school teacher, Jenab Elmi.

Beginning with a casual friendship between these two schoolgirls coming of age in a politically divided 1960s Iran under rule of the Shah, Roya, the daughter of a prominent family, is envious of the fierce independence of her religious classmate Shireen. But Shireen has secrets of her own. Together, Roya and Shireen contend with becoming the women they want to be and, in doing so, make decisions that will cause their tragic undoing. In the unraveling of family secrets, Roya begins to question how she was raised and how to become the person she wishes to be.

Iranian culture and society was such, as indicated in Ghahremani's book, that the father of the young student, Afshar, felt a need to caution his daughter about discussing matters of the Shah's secret police in public. The overall theme of the book would later explain why. Afshar would witness one of her female classmates actually being forcibly dragged out of her school by this secret police, SAVAK, never to be seen or heard from again.

Steeped in Iranian and Muslim tradition, Afshar's friend and classmate, Shireen Payan, came to school wrapped in her "chador," the dark cloth that covered her head to toe. This was emblematic of Payan's faith and religious practices, whereas Afshar had none.

The turning point was the coming of age of these two female classmates, when Payan would acquire a husband and be so enamored by his beliefs, however militant and defiant, that Payan would have to follow suit. Demonstrations by the students against the Shah's regime were occurring continually, and Payan and her husband found themselves in the middle of it. Of course, the Shah's secret police was not going to react to dissent as we might here in America. Along with Payan and her husband's involvement in this dissent, it turns out that Payan's and Afshar's high school teacher, that they both revered, Mr. Elmi, was one of the protaganists against the government. 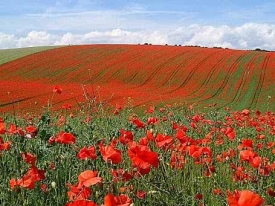 The poppies represented a poetic and central theme throughout the book, as Afshar's affluent father would actually be in communion with the head of the Shah's secret police, unbeknowest to her, having him over to engage in opium smoking, along with other well connected members of Iranian society. This connection would later serve the young Roya Afshar well later, when she would challenge her father's edict.

The poppies and Afshar had a connection, from a poetic standpoint. Of all the flowers, regardless of the variety and array of colors that made the family garden so spectacular, it was this fragile bloom that seemed to come closest to her heart.

The author states in her book that each day, the poppies seemed to reflect Afshar's own feelings of joy, sorrow, even fear. They spoke of hope, yet the danger hidden in their essence--that mysterious scent of opium--frightened her. Poetically speaking, to Afshar, the poppies rose from the mud in their garden with pride, yet bent their heads in modesty. And, although she didn't know a happier shade of red, they reminded her of sorrow.

In the end, in coming to the support and defense of her friend Shireen, Roya would alienate herself from her opium smoking father, and be forcefully exiled to America, where she would reunite with a college classmate and start a new life.

Modern day newspaper headlines put Ghahremani's story in perspective. A November 16, 2010 story in the San Diego Union-Tribune reports of an Iranian woman sentenced to death by stoning for adultery in which the woman, Sakineh Mohammadi Ashtiani, calls herself a "sinner." Although by our standards, we may look upon this as archaic, Ghahremani's book helps us to understand such Islamic rulings.

In another story in the November 23, 2010 edition of the Union-Tribune, Asia Bibi, 45, an agricultural worker and mother of five, became the first woman to be sentenced to death for blasphemy, according to human rights groups. Although this happened in Pakistan, it underscores the clash of religion and tradition demonstrated in Ghahremani's book. Adding pressure to the Pakistani authorities to overturn the sentence of Bibi, Pope Benedict XVI appealed recently for the woman to be freed unconditionally.

The mere fact of being a Christian or an Ahmedi in Pakistan makes an individual vulnerable to the Draconian blasphemy laws in this Islamic society, similar to the theme of Ghahremani's book. 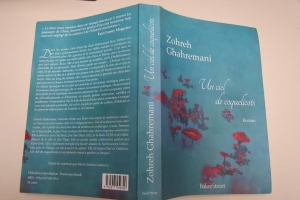 There is now a French and Persion version of Sky of Red Poppies which directly quotes and references this review on its back cover. The "East County Magazine Live!" radio show sat down with the author and discussed this book and other topics. The host of the show, Reina Menasche, referred to Ghahremani as the voice of the Iranian-American diaspora.

There are many twists and turns in Sky of Red Poppies, a book revealing a clash of cultures and abounding with intrigue, which I highly recommend. 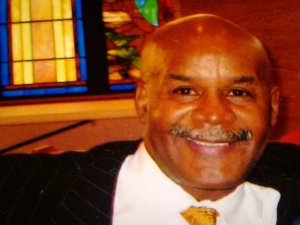 Dennis Moore has been a member of the San Diego Writers/Editors Guild. He has also been freelance contributor to the San Diego Union-Tribune Newspaper and is currently the book review editor for SDWriteway. Mr. Moore can be contacted contractsagency@gmail.com or you can follow him on Twitter at: @DennisMoore8.

In partnership with the Carlsbad Library , a panel discussion moderated by Susan McBeth and featuring Kitty Morse, Judith Liu, Kathy Diamant, Laurel Corona, Zohreh Gharemani, and Caitlin Rother, will be held at the Carlsbad (Dove) Library, Saturday, June 29, 2013, at 4:00PM. It is free to the public. Zohreh Gharemani recently informed me of her new book, "The Moon Daughter," which she indicates has been an unexpected hit, coming on the heels of the hugely popular "Sky of Red Poppies."

Tens of thousands rallied in Pakistan's largest city Sunday in the biggest show of support yet for a 14-year-old girl who was shot and seriously wounded by the Taliban for promoting girl's education and criticizing the militant group.

Gelareh Bagherzadeh was a gregarious Iranian-born woman studying molecular genetics. She taught children to play the piano and volunteeres at her church. Why on earth would someone want to kill her? That question has befuddled family, friends and police for five months, ever since Bagherzadeh, 30, was found in mid-january slumped over the steering wheel of her Nissan Altima steps from her home with a single gunshot wound to the head. Bagherzadeh was an outspoken activist against Iran's Islamic theocracy, championed women's rights in the Middle East and had recently converted from Islam to Christianity have spawned a host of theories about her murder (everything from an Iranian intelligence agency to claims of other foreign government involvement).

Congratulations ! Thank you Dennis for this review, I would love to get a copy of the book and learn more about it! Anat

Yes, this is wonderful news! It is my understanding that the author will be at the next regularly scheduled meeting of the San Diego Writers/Editors Guild, where you should be able to obtain a copy of the book, which is a nominee for KPBS' "One Book One San Diego."

Congratulations on your nomination!!!
I am proud to have met and know you!
Dennis sent me an email with this info and I did VOTE FOR ZOE'S BOOK !!!
What a wonderful achievement!
Have a great 4 TH of July!!!
You deserve it.

Love,
iolanda scripca
author of "Lava of My Soul"

KPBS has chosen "Sky of Red Poppies" as a candidate for next year's "One Book One San Diego:" www.kpbs.org/onebook. I feel honored to have been given the opportunity to write this review, and to know Zohreh Ghahremani, and I will be even more honored for "Sky of Red Poppies" to come out on top, for it is a tremendously insightful book.

Author Zohreh Ghahremani has been invited to attend the 7th Annual Diamond Literary Festival on June 3rd at thE beautiful Bahia Resort Hotel in Mission Bay.

Nearly a week after Iranian President Mahmoud Ahmadinejad launched a plan to overhaul a long-standing system of state subsudies, Iranians are reeling from drastic government-ordered price increases for staples such as fuel and bread amid signs of growing frustration.

A very interesting book excellently reviewed by Dennis Moore. It has always intrigued me the paradox of cultures on Earth, cultures co-existing in the same time frame. As an amateur photographer I, too, have a photograph entitled "Death by Stoning" depicting this primitive way of punishment which still exists in some countries in the 21st century. I am sure that after reading Sky of Red Poppies the reader will appreciate much more living in this free country. (I know!) Thank you, Dennis Moore, for yet another informative and analytical book review.

Iolanda, I too, have always been intrigued by the paradox of cultures on Earth. I learned a lot about other cultures by reading this book, and talking with "Zoe."

Thank you for this wonderful review. Such articles justify the existence of this novel and years of work that went into it. The overwhelming response from readers assures me that I have accomplished what I had hoped for. That, without taking sides, a good nation is finally viewed outside the context of politics, religion or social class. As stated in a Persian poem, “A word that rises from one’s heart, can only settle into another.” Thank you, Mr. Moore, for proving it right. ”

For information regarding my book events and/or to organize a talk, please visit www.zoeghahremani.com

A spate of attacks against women and girls in Iran's cultural cultural capital of Esfahan has been met with street rallies and social media protests, seemingly alarming Iranian authorities, who have promised to take steps to quell the disfiguring assaults, according to a story written by Ramin Mostaghim in the Los Angeles Time on October 28, 2014. The story further states: "At least eight or nine such attacks - which are generally carried out by assailants on motorbikes who flung acid into their victim's faces - have occurred in recent weeks, with some Esfahan residents saying they suspect the number is higher." It seems that assailants have targeted those deemed to be dressed immodestly.
The author of this fantastic book told me recently that there is now a French version of "Sky of Red Poppies" which references on the cover my review of the book.