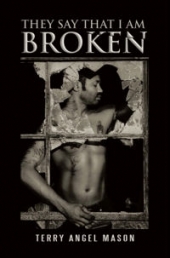 September 29, 2011 (San Diego) -- At age 8, San Diego writer Terry Angel Mason began his love affair with poetry. And in his latest book, They Say That I Am Broken ($20.00, iUniverse), that affair is inflamed with a passion that illuminates the struggles and triumphs of the gay male of color. A collection of seemingly unrelated stories, essays, and poems reveals the depth and breadth of what it means to be gay in Black America.

While the book splits its pages fairly evenly between the uphill battles and the uplifting triumphs, it’s the power of the former that is best captured in Mason’s simple, powerful prose.
“I longed for the touch of a human hand and the need for intimacy was so strong,” writes Mason in the poem entitled “Where Have I Been All Your Life? Is the Question You Asked Me!”
A publically-appropriate physical expression of love, oft taken for granted among heterosexual couples, is poignantly absent, perhaps even helplessly unattainable for the young, gay Black man. And it’s just part of the loneliness Mason hones in on as he recounts the longing to be accepted by self and society. It’s a sentiment expressed throughout the words of the text.
Of particular interest in They Say That I am Broken is the recurring frustration with the Christian church in its response to the gay issue in society. A minister himself, Mason is no stranger to the unique challenges communities of faith pose to the closeted gay or lesbian parishioner. Time and time again, he gives glimpses into the internal struggle facing said churchgoers as they search for reconciliation between their faith and sexual orientation. And he does so gracefully, placing responsibility on religion when needed and acknowledging the intrapersonal battle where appropriate.
For all of its success in bringing authentic emotion into the story of being gay and of color, the book has its shortcomings. As previously alluded to, the book’s organization leaves much to be desired for the lay reader, individual stories, essays, and poems seemingly disconnected within their respective chapters. The reader is best off approaching the individual narratives through the lens of the book’s overarching theme, rather than the designated chapters.
Mason’s writing is laced with the fury and passion of any great civil rights leader. Through his words, readers get a glimpse into the lonely, frustrating, and misunderstood world of the gay Black American. And along the way, the journey is highlighted by triumphs – big and small – that give all gay Americans hope for a nation that realizes acceptance and equality for all walks of life.
Joshua P. Romero is founder and director of Solace, a coming out peer support group for LGBT Christians. He served as Faith Initiatives Representative to the San Diego Chapter of the Human Rights Campaign, wrote the faith column for Gay San Diego, and speaks at conferences and churches on issues of faith and sexual orientation. Romero attends Missiongathering Christian Church in North Park where he leads a gay men’s small group.