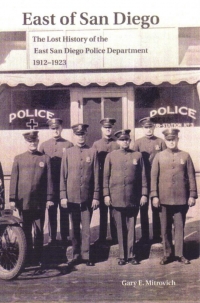 To counter the reckless operation of motor vehicles, City Marshal J.P. Ayers “...declared war on all automobile drivers” in 1916.

Few people remember that San Diego once had an eager rival just east of Boundary Road (roughly parallel to present day I-805). By a vote to incorporate on a rainy day in 1912, the City of East San Diego asserted full civic governance of the area known since 1888 as City Heights. For 11 turbulent years, East San Diego charted its own destiny, nourished by the dreams that fueled the early 20th century land boom.

During those years, the population soared from 4,000 to 12,000. The trustees and administration of the new city struggled to keep pace with the census. On the front line were the City Marshal and the untested East San Diego Police Department. With this monograph, Gary Mitrovich begins the recovery of their story.

The series of colorful characters enlisted to lead the fledgling East San Diego Police Department form the backbone of the book. Much like the civic leaders who hired them, the early marshals were often greenhorns, with little experience and still less formal training in police work. They were improvisers, some more imaginative than others. 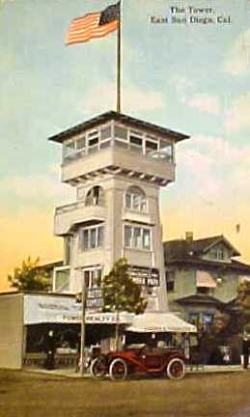 An early decision to make East San Diego a “dry town” ensured that the City Marshal and his assorted deputies would spend a considerable amount of time chasing down liquor offenders. Well publicized “raids” on well-known establishments – such as the notorious Pink House on El Cajon Boulevard – were closely calibrated for maximum impact on local elections. One artful dodge of the blue laws was the Blind Pig, a reference to taking advantage of a loophole that allowed saloonkeepers to provide “complimentary” beverages to customers who paid to see an “attraction,” such as an odd animal. Pity the creatures called upon to be the requisite spectacle.

The new Department was besieged by complaints of traffic problems - accentuated by the antics of newly motorized scofflaws. (On that score, local readers are likely to note that little has changed over the years.) Without vehicles of their own, officers were often left standing on the curb. Acutely short of funds, the Department finally deputized several motorcycle officers, who rode to the rescue on their personally-owned machines. Fed up, City Marshal William Gray launched a “crusade” on speeders in 1919. Armed with stop watches, his deputies set speed traps and collared 300 offenders in just five weeks, resulting in 125 fines imposed – all for speeds in excess of 30 mph! 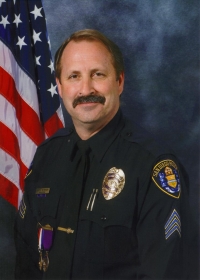 An experienced SDPD officer and founding member of the SD Police Historical Association, Mitrovich enlivens his account with well-chosen anecdotes illustrating the inevitable human foibles and follies on display in any community of that era. Petty thieves targeting garden hoses and bread or milk deliveries will seem quaint by modern standards, but were taken seriously in their day.

Not all was naughtiness and shenanigans. Boom town dreams are often broken and the “rendering of assistance to suicide cases” was noted among the varied duties of the City Marshal and his deputies. To the chagrin of East San Diego civic boosters, the city earned an unwanted distinction as the site of the first “real (armed) bank robbery in this section of the United States.” Those who wore the City of East San Diego badge faced genuine dangers. Not for nothing were guns, pistols and fireworks considered “a menace to life and liberty.”

The author sketches a number of charming portraits of daily life, high and low, in the growing city. Long-time residents of San Diego will recognize some enduring community traits. A prickly sensitivity to perceptions of the City held by observers “back East” was already common currency. With the revival of interest in historic Highway 80, readers will appreciate the additional details of life along El Cajon Boulevard (once known as La Mesa Road) during this sometimes rowdy period.

Among many fascinating antecedents to contemporary politics in San Diego, the partisan deployment of faith-based organizations is foretold in the tale of the East San Diego Civic League organized in 1916. The author documents the courage of the editors of the East San Diego Press in taking the League’s true purpose to task on the front page. “The main idea of this church organization is to create the impression that every member of the present city administration is crooked, in order to foster the personal ambition of the League leaders.” As they do today, aspirants for senior law enforcement posts navigated those waters gingerly. 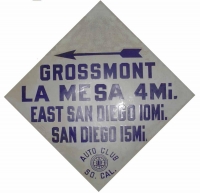 The ever-contentious subject of annexation gives the book a second continuous thread. When the community was finally annexed to an expanding San Diego in December, 1923 the City Heights name was re-adopted and several East San Diego officers simply segued into the SDPD. Yet a sense of independence lingered for decades. A landmark East San Diego road sign presided over a major intersection until the 1970s, silent witness to one-time ambitions. Born in a rain storm, the end of the City of East San Diego was hastened by a now-perennial southland predicament: an acute water shortage.

Numerous photographs add immediacy to East San Diego’s beginnings. Charts in the appendix enable the reader to quickly translate original street names to those in place today. These are invaluable aids to understanding the cityscape of the period. The author credits the archives (and curators) of the San Diego Historical Society for the preservation of key research materials, in particular the irreplaceable collection of the East San Diego Press newspaper. Kudos for the book’s handsome design and layout are due to Robert Goodman at Silvercat.

The text itself would benefit from a thorough copy edit. And some readers may be frustrated by the uneven treatment of the storyline. Limited by the paucity of reliable sources, the narrative sometimes ends abruptly in blind alleys or peters out in family tree minutiae of little subsequent purpose. To his credit, Mitrovich prudently refrains from asking the slim available evidence to carry more freight than it can bear.

Instead, he considers this volume as work-in-progress and calls upon knowledgeable readers to pitch in and fill out the East San Diego story with him. A future edition would shift the emphasis away from events to focus more on the people of the city – the good folks who built the City Heights we still see along the west-east boulevards today. 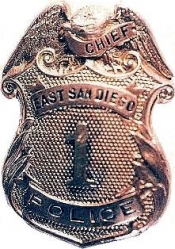 The young city’s brief history offers useful lessons for elected officials – especially police leaders – and citizens alike. Implicitly, Mitrovich asks us to consider why we are so prone to repeating mistakes. What makes our public safety organizations so ill-equipped to capture and leverage their institutional memories? How might we break the wasteful cycle of forgetting, relearning and forgetting again? Clearly, one antidote is to know and to understand the past.

Readers intrigued by the evolution of law enforcement in greater San Diego will find a visit to the new San Diego Police Museum on College Avenue – just north of El Cajon Boulevard – the perfect complement to the book. For visitor information see http://www.sandiegopolicemuseum.com/

East of San Diego is a serious work, but the mood is playful. The author’s sense of humor and open sympathy for the neighborhood and its characters come through in every chapter. Spending an afternoon with this “little history,” as Mitrovich calls it, is both rewarding and just plain fun.

***
Walter Hall is the pseudonym of a La Mesa-based national security analyst and defense strategist at Black Swan Advisors.