I’M IN THE TUB, GONE. By Richard James Carlson 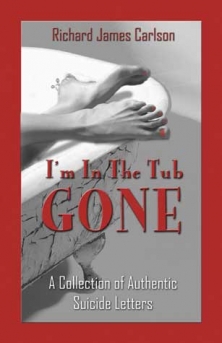 “Today is the final day of this life…”

Only once in a long while do we encounter a book that just won’t let go. This is one of those books. The subject is suicide; the format is simple: a collection of the notes left behind. Identities are protected, but the texts are rendered just as they were found. Unvarnished. No commentary. Just a last wish, an edgy accusation, or a lonely cry against the coming night. Each voice wallops the unsuspecting reader from a different corner of life.

An experienced SDPD emergency negotiator, Richard Carlson introduces the collected letters and notes with a personal appeal not to give up. He is addressing two audiences: those who would consider taking their lives and the rest of us. After absorbing even a handful of these notes, readers will find it difficult to argue. 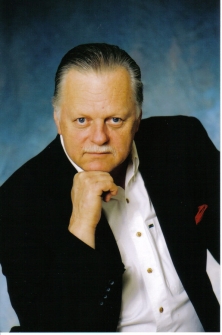 Carlson (photo, right) writes with the authority of someone who has been there, an officer who has looked suicide in the face and lost. It is a searing experience, one that officers never really forget. Yet, he asks the reader to consider these notes with empathy, not pity. He wants to keep the lines open, the possibility of survival alive.

The title comes from one of the notes. “I’m in the tub, gone.” That’s the complete text – five words.

Others ramble in no apparent direction before closing with “Good bye.” Long or short, they reveal a catalog of human emotions – some agitated, others resigned, all very close to the surface. Gradually, the text yields a number of common elements: confusion, regret, unrelenting pain, hopelessness and a desire not to hurt others. Very few use the moment to settle accounts. Rage rarely makes an appearance.

Many express an all-too-human concern to be remembered well. “Just say (Fred) was a good guy.” Among the most moving are those that seek to comfort family and friends. Still more wrenching are messages from parents to children or pleas for someone to care for a child orphaned in the act. And then there are those authored on the second or third attempt. How does that happen?

There are echoes of a lingering sense of responsibility. “Someone please tell my job.” Others carefully prepare grocery lists with instructions for the disposition of their belongings, and themselves. Occasionally, there are flashes of wry humor – though the circumstances render it darkly. “Peg, my PIN is 1144 to cash card. Please drain account.”

What ties the whole together is the unmistakable humanity of those who put their final thoughts to paper. Who among us has not, at one time or another, felt the lash of such emotions? Who would not wish for a final resting place “…with lots of pillows”? These are the words of people in extreme situations, but they are not messages from a people apart.

Suicide is a silent killer. It stalks all communities, without preference. It is a major, expensive and preventable public health threat. According to the National Institute of Mental Health, suicide is the eleventh leading cause of death in the U.S. with 33,300 fatalities in 2006 alone. Health authorities estimate that more than 12 attempted suicides occur for every suicide death.

This unique volume asks us to think about that. And then, to act.

Author and 30-year veteran of the force, Richard Carlson belongs to a new generation of San Diego police officers who have taken up the pen. This cohort now includes Gary Mitrovich, SDPD chronicler Steve Willard and at least a dozen others. Police fiction, by former police officials, has always found its audience. Joseph Wambaugh’s best-selling novels are well-known locally. But Carlson and Mitrovich are doing something different. They are writing first drafts of what will become the history of law enforcement, the agencies and the people, in greater San Diego.

Interestingly, they are not laboring at the keyboard alone. The web site Police-Writers.com now hosts nearly 1100 officers, from 455 state and local law enforcement organizations across the U.S. Among them, they have published over 2300 books. An incomplete list on the site identifies 16 San Diego officer/authors. Their literary work ranges widely. Some are novelists writing young adult fiction and fantasy or paranormal romance titles, others create professional instruction texts such as Collision Analysis and Scene Documentation. (Visit http:www.police-writers.com/index.html)  Fortunately for San Diegans, there is a growing contingent of serious-minded historians in the mix. And they’re busy.

When they are not on duty, or writing, Carlson, Mitrovich and their SDPD colleagues serve on the board of directors of the SD Police Historical Association. Earlier this year, with Carlson at the helm, the Association launched the San Diego Police Museum on College Avenue, just north of El Cajon Boulevard. Before the doors opened, the cops had to become curators. A challenging transition from evidence collection, preservation and presentation to archival and museum stewardship followed. To their credit and our lasting benefit, they made it.

The result is a community treasure, with abundant police lore for buffs and public safety education for parents, students and children. Volunteer docents at the Police Museum are professional, knowledgeable and welcoming. Even the best-informed visitors will learn something new. With the year-end holidays already on the horizon, the museum’s gift shop offers creative solutions – and some excellent publications. For visitor information see http://www.sandiegopolicemuseum.com/.

In a highly visual and frequently entertaining way, the exhibits keep us connected to San Diego’s past. Their real subject is not a narrow history of law enforcement, but the evolving – and often rocky - relationship between the police and the community they serve. The Museum offers a chance to overcome the debilitating effects of our transience and limited attention spans. Without an understanding of what came before, as founding member of the Museum’s board Gary Mitrovich points out, we all too often repeat ourselves and our mistakes. We can ill afford to keep doing that.

In recognition of the County’s interwoven jurisdictions, the Museum’s directors are searching for ways to collaborate with other San Diego departments. East County police leaders ought to engage. Reconnecting to a common past could be a tonic for our collective amnesia – and could well lead to more informed policy choices.

By telling East County’s stories, we will better understand what worked for the inland departments, what did not. And we’ll all learn from the sometimes colorful experience of our neighbors. Relations between police and community were not always, nor everywhere, cordial. Tensions rose when early SDPD deputies attempted to collect municipal taxes. Wyatt Earp famously quipped to Deputy Marshal Campbell that “You’ll be stepping in your coffin next time you come in my saloon.”

Whether facing off with criminal gangs, promoting public safety, or intervening to save a life from suicide, these are the men and women we ask to “walk the talk” for us. By taking the family to the Police Museum we not only learn how they do that, we let them know that we care.

Walter Hall is the pseudonym of a La Mesa-based national security analyst and principal at Black Swan Advisors.

This book provides some insight into the mind of people so desperate that they would take their own life. Anyone who is in the mental health field should read this book and be prepared to experience the thoughts of those who have taken their lives in desperation : - san tan valley obgyn.