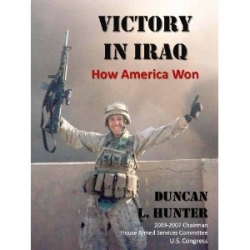 “The community of America’s military folks, active and retired, are at once a national resource and a national treasure.”  --Former Congressman and Chairman of the House Armed Services Committee, Duncan L. Hunter

December 14, 2010 (San Diego's East County)--The title of this book will delight many and annoy many others – who will likely pass it by. That’s too bad. Because at heart this is a tribute book. And a timely one. The setting is Iraq, but the subject is American grit, talent, innovation, and occasionally plain, raw courage. The ham-handed title is a distraction.

In Iraq, the real victory to be acknowledged does not accrue to either US policy or strategy. Rather it is the record of bravery and self-sacrifice that deployed Americans summoned in the face of hardship and extreme danger. For a nation whose understanding of our troubled engagement there is heavily conditioned by the Pat Tillman or Jessica Lynch stories – or worse, Abu Ghraib – Hunter’s text is a useful, indeed a necessary, corrective. It deserves a full-spectrum audience.

One of the enduring frustrations of military professionals – including their ardent advocates on Capital Hill – is Americans’ strange ignorance of the contributions their military makes to the fabric of our society. Generation after generation, the military services shape recruits into citizens who go on to lead their communities in ways great and small for the rest of their lives. This book provides riveting and often moving accounts of how that shaping occurs amid the horrors of war and the frustrations of subsequent pacification operations. 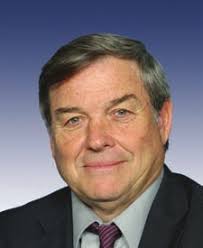 True to his past as a leading defense hawk, Hunter tells his story in a clipped, often bare-knuckled, take it or leave it style. The perspective is American; even our closest allies in the coalition forces are scarcely mentioned. The principal action is US military; the tens of thousands of contractors, many recruited from Central America to join the fight, make almost no appearance.

In Hunter’s telling, the Iraqis themselves are largely relegated to the background, bit players in an American drama. By contrast, General Amos, the new Marine Commandant, defined “victory in Iraq” quite differently in recent remarks to the troops at Miramar. “What did success look like for us in Iraq, for us as a nation…We stood up the Iraqi army…we helped stand up the Iraqi police force. They became part of the solution…Success was when the Iraqi people set up their own government, the local tribal chiefs were in charge….” (Union-Tribune, Dec 8, 2010)

Despite its 400+ pages, Hunter’s narrative avoids many of the questions that still vex Americans. Readers seeking to understand why the US chose to invade Iraq, why the streets were laden with IED’s, not flowers, what our country (not just our armed forces) has done there for the past seven years, or why Americans, uniformed and civilians, are still there in very large numbers, will not find the answers here.

Given the former Congressman’s chairmanship of the House Armed Services Committee for much of the period, readers might expect some insight to how Washington decided on war. But Hunter glides over the consequences of Defense Secretary Rumsfeld’s twin infatuations (high-tech “shock and awe” with saddles and cell phones special operations) and chooses not to explain why his House Committee remained silent when the Army’s Chief of Staff, General Shinseki, who alone had the courage to testify honestly about the forces necessary to occupy and pacify Iraq, was not just dismissed but publicly slapped into retirement by an angry Pentagon.

Instead, Hunter adopts a tone that makes little room for statesmanship, preferring to settle scores. That decision diminished the book, marring it with tiresome bashing of the American press and pugnacious, but colorful, takedowns (Democrats were locked on their platform “like a tick on a hound’s ear”). Such rhetoric may play well on the stump, but it does little to advance either the scholarship or the credibility of the author’s interpretations.

No surprise then that Hunter sees “the surge” as a novel and astute shift in the counterinsurgency effort, when it was simply a grudging recognition of the scope of the occupation and a belated acknowledgment that the garrison-centered approach was failing. Nor does Hunter bother to relate how many of the crucial surge-era deals, fueled by large bribes in American dollars, unraveled in the succeeding months, unleashing renewed violence and instability, further opening the door for Iranian influence.

Similarly, the critical Anbar Awakening in western Iraq, which began months before American forces were surged, is seen through a tinted lens – with little recognition, much less examination, of the outrage Iraqis themselves felt at the barbarism of the Al Queda opportunists that poured into the chaos created by the Coalition Provisional Authority’s serial fumbles – beginning with the dissolution of the rank and file Iraqi army. By 2007, one of General Petraeus’ senior military advisors offered a pungent summation, “We have done some stupid s*** in Iraq.” Making a change was hardly brilliant. It was just necessary.

This book will be of little or no value to historians and still less for readers seeking insight to their country’s strategic use of military power. For the invasion and the taking of Baghdad, Bing West’s The March Up or David Zucchino’s Thunder Run are better choices; on Fallujah, West’s No True Glory is arguably the best reconstruction to date; for Coalition Authority bungling in the early years, Rajiv Chandrasekaran’s Imperial Life in the Emerald City is unvarnished and heartbreaking; on the surge, Tom Rick’s The Gamble paints a far more nuanced, and roundly sourced, account; for the grunt’s view David Danelo’s Blood Stripes and Nathaniel Fick’s One Bullet Away stand alone as sharply rendered portraits of Marines at the tip of the spear.

At the end of the day, readers are unlikely to conclude that a military intervention that cost thousands of America lives, severely injured tens of thousands of our finest young men and women, wrecked the American treasury, fatally discredited the administration’s Freedom Agenda and strengthened Iran – with only a glancing blow to the terrorist organization behind 9/11 – was a decisive “win.”

But that is not to say that the men and women America sent into harm’s way did not achieve extraordinary victories, whether as individuals or with their units. They surely did. And Hunter is surely right to remind us of that. So find a copy of this book. Ignore the author’s triumphalism, embrace his genuine affection for our nonpareil military and spend some quality time over the holidays with honest-to-goodness American heroes. They are indeed “a true national treasure.”

Looking for a special Christmas gift? East County readers have an opportunity to meet the author and acquire a signed copy at Maxwell's House of Books on Saturday, Dec.18th, from 3:00-6:00. Maxwell’s is on La Mesa Boulevard, in the center of the La Mesa Village business district. Signed copies will also be available at Maxwell’s the following week – while they last.

Walter Hall is the pseudonym of a La Mesa-based writer and national security analyst. He is a principal at Black Swan Advisors, a communications consultancy.

Indeed it was a very great story. The bravery of the American lead them in to victory.gift for men