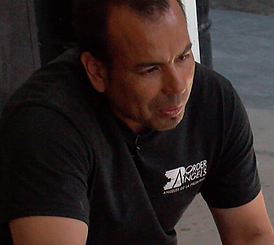 April 24, 2017 (San Diego) – Border Angels activist Hugo Castro is back in San Diego, after more than $15,000 was raised through a Go Fund Me site to pay for a medical evacuation. His partner, Gaba Castro, posted the news on Facebook.

But Castro may face a long recovery.  KPBS reports that his injuries include multiple head wounds and possible brain damage.

Castro was found severely beaten on a street in Tlanepantla, Mexico after posting a video on Facebook stating that his life had been threatened.  At the time, he was on his way to help a relief caravan for refugees traveling from Central America to the U.S., an action aimed at protecting refugees from falling prey to human traffickers.

His family has asked for continuing donations to help pay for his medical expenses. Donations can be made at a Go Fund Me website called “Bring Hugo Home.”