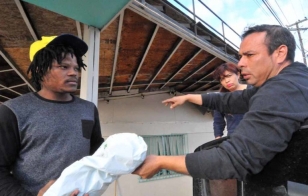 By Ken Stone and Chris Stone

April 15, 2017 (San Diego) - Friends and family of migrant activist Hugo Castro fear for his life in the wake of a Facebook video in which he appeals for help on a road southeast of Mexico City.

Castro, a high-profile volunteer with Border Angels, has not been heard from since about 5:30 p.m. Thursday, when he found himself stranded on the side of a highway to Puebla in a crime-ridden area.

The 20-minute video shows Castro on a busy highway. Puebla is about 66 miles southeast of the capital, which is 1,440 miles from San Diego.

“Castro mentioned that he was attacked by a group of ‘criminals’ and had to get out of a bus and sneak down the road,” said Agencia Fronteriza de Noticias.

In the video, Castro said he was at Kilometer 37 of the Mexico City highway to Puebla and that he did not plan to move until someone picked him up.

Gabriela “Gaba” Cortés, Hugo’s wife, reportedly said he had contacted her at midnight Wednesday “to let her know that he was already aboard the bus that would take him to Chiapas, but he did not know any more.”

Cortés reported on Facebook she has not heard anything from him and asked the authorities and partners to help him find him. She said the family is cooperating with the police and is optimistic, hopeful the GPS on his phone can help track him.

On Friday night, she posted a video (see below) and said: “These are difficult times for everyone. We ask for respect and high to speculation and misinformation Hugo Castro is still missing and we don’t have any substantiated information. We ask you stay tuned for the announcements of the family.”

She said reports that Castro has been found were wrong, and that people should get information only from the family.

La Jornada Baja California said a group of acquaintances went to the place where Castro was at the moment of the live transmission, but couldn’t find him.

Media reports said Castro left a couple days ago from his home in Tijuana, bound for Tapachula, Chiapas, where he would meet up with the caravan of the “Viacrucis del Migrante” on their way to that area near the Guatemalan border.

El Periodico reported that a hundred undocumented immigrants, mostly from Central America, were traveling north by foot and vehicle “to denounce the violence they suffer on their route to the United States and demand a dignified treatment of the authorities.”

Organizer Cristóbal Sánchez, a human rights defender of the Migrant Culture Movement, told the paper: “It is Holy Week and we try to emulate the Passion of Christ, the suffering that he had when he was crucified, and thus to make visible violence, abuses, human rights violations, kidnappings and police repression.”

In his video, Castro expressed fear of being watched and said he was in danger.

Susana Smith, a friend of Castro’s, told Times of San Diego that human rights organizations were being contacted. She appealed for people’s help on both sides of the border and said Cortés has been doing interviews with Mexican media.

Alex Mensing‎, a paralegal with the University of San Francisco Immigration and Deportation Defense Law Clinic, said on Facebook that Castro’s family “is in communication with the National Human Rights Commission and are looking for him.”

Castro, 45, is a volunteer coordinator for Border Angels’ SOS Migrant program and takes food to 32 shelters north of the border.

SOS Migrants responds to emergency calls for help and reaches about 5,000 immigrants, including 3,500 Haitians in 32 shelters south of the border. Also helped are Central Americans fleeing violence at home and those deported from the United States.

Founded by Enrique Morones in 1986, Border Angels is an all-volunteer nonprofit advocating for human rights, humane immigration reform and social justice with a focus on U.S.-Mexican border issues.