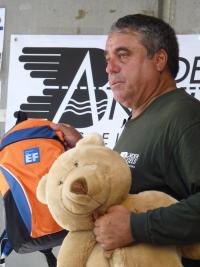 July 10, 2014 (San Diego) – Border Angels, a nonprofit San Diego organization, has received over 10 tons of donated clothing, toys, diapers and food for the Central American refugee families coming to our region.  Now the group has launched a teddy bear drive to “share the love with our refugee children,”  said Enrique Morones, founder of Border Angels.  Donated items can be dropped off at the Border Angels office at 2258 Island Avenue in San Diego.  The group also seeks an East County drop-off location.

This is not the group’s first effort to help people in need locally.  Border Angels successfully raised donations to help wildfire survivors in our region, as well as to help victims of the Easter Sunday earthquake just over our border several years ago.

The wave of Central American immigrants fleeing violence and risk of death in their homelands have been the subject of controversy.  Anti-immigration protesters blocked several busloads of the refugees in Murrietta, chanting racial slurs. Five of the protesters were arrested after some tackled law enforcement officers.  Now, as people across the nation and around the world have seen video of the controntation, many have stepped forward to help the immigrant children and their families. 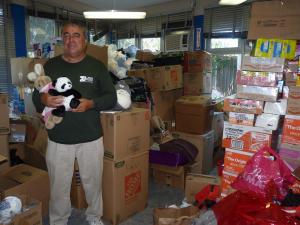 At Border Angels during our visit, calls came in from Illinois and northern California. Donations have come in from as far away as Japan. Some have offered lodging for immigrant families.  Others are giving funds, food, clothing and toys for youngsters who have been frightened by the protesters, fearful of being physically harmed.

Some political leaders locally have called for the families to be deported, including Representatives Duncan Hunter and Darrell Issa, who also call for stronger border security.  These arguments fail to address the fates that likely await these individuals if they are sent home since unlike many Mexican immigrants fleeing poverty, these Central American refugees are largely fleeing threat of imminent death and in the case of Mayan Indians from Central America, genocide – much like refugees in parts of Africa and the Middle East who have been granted refugee status by the United Nations.  But no refugee camps have been setup in Central America, so there is no safe place to go.  So they head north, hoping for mercy when they reach our border, since most have families willing to take them in.

Unlike past waves of undocumented immigrants crossing from south of the border, the Central Americans did not attempt to cross the border illegally.  Instead, they presented themselves voluntarily to Border Patrol agents, asking for asylum due to violence that forced them to flee their homelands and that would put these families and their children at risk of death if they are deported.

The news has focused largely on unaccompanied minors, some as young as eight years old, traveling alone to the U.S., some victims of human trafficking or fleeing threats from drug cartel gangs.  But the groups arriving in San Diego by bus and plane from overcrowded Texas facilities have thus far included only families, not children who came here alone.  Immigration advocacy groups all have said that 90% of these families have relatives here in the U.S. who they wish to join, if allowed to stay.

Morones says flatly that if these children are sent home, “They will die.” 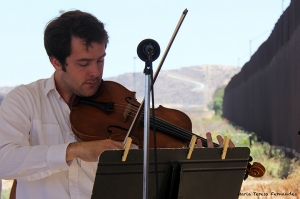 He added, “This past week we saw the worst of the American spirit in Murrieta and yesterday we saw the best we have to offer as a people with the San Diego Symphony and Baja California Orchestra presented by Border Angels at Friendship Park,” Morones told ECM in an interview on Monday. “Love, like music has no borders.”  Film star Demian Bichir of “A Better Life” joined that gathering.

Are East County Border Patrol facilities holding any of these Central American families?

Morones said it's quite possible, though officials have been tight-lipped about the exact location of the families for security reasons, hoping to prevent more disruptions as occurred in Murrietta.  Congressman Juan Vargas visited a detention facility in El Centro and said children there were terrified that they would be met with similar protests and feared physical harm.  Assemblwoman Lorena Gonzales visited a detention facility in Ventura and said the children there were being well cared for. But help is needed, since faciliites are crowded and there are not enough supplies to meet the needs of the children.

In addition to teddy bears, Border Angels seeks donations of toys (including items for older children and teens), clothing, backpacks, diapers, and other supplies needed by families. He encourages donors to imagine fleeing your home with only your children and the clothes on your back; what you would need, the refugees will need.

Border Angels is coordinating with Border Patrol and Immigrations & Customs Enforcement (ICE) to arrange delivery of of the donated items. Nearly all of the current immigrants will be released to relatives in the U.S. and instructed to return for hearings in those communities, passing through San Diego only temporarily, immigrant rights groups have indicated.  For those few without families here, Border Angels is also working to line up temporary lodging pending hearings.

Besides the Border Angels office at 2258 Island Avenue in San Diego, the public can also bring donated items to drop off points in the South Bay at the MAAC Community Center in Chula Vista and in North County’s Universalist Unitarian Church in Solano Beach at 1036 Solana Drive (drop off east of the hall).

Border activists used to place gallons of bottled water in the desert so emigrants would not die from dehydration. I would see the water in remote areas of Imperial County when I was off roading and riding dirt bikes. No one should have to die in the desert or drown in a river or canal trying to reach the US. I saw a group filling water jugs while camping at McCain and spoke with them, just people seeking to have a better life. I gave them some canned food.