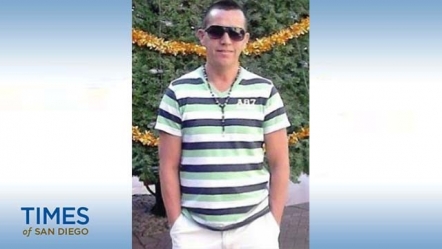 Photo via Facebook: Guadalupe Olivas Valencia, gardener who jumped off bridge at border after deportation, unable to support his three children after wife’s death

Guadalupe Olivas Valencia jumped to his death Tuesday from a bridge connecting Mexico and the United States 30 minutes after being sent to Baja, according to news reports.

Enrique Morones of Border Angels called the death a “personal tragedy. And there will be more of these.”

Trump’s policy will not make the United States safer, but will lead to more fear and less compassion, Morones told Times of San Diego in a phone interview.

“This is not what this country is all about,” he said.

Morones said he was asked to speak to children and parents at a school recently because they are so scared by the latest immigration news.

Children will end up walking to school alone, rather than with their parents, because of the parents’ fear, Morones said Wednesday.

“The children hear their parents talk and fear that they may be taken away at any moment,” he said.

Olivas, 45, tried to cross into the U.S. illegally Monday, was detained and sent back to Mexico on Tuesday, said the Los Angeles Times.

Olivas had worked as a gardener in California for years to support his three sons after his wife died, the Times reported.

Yuriba Valles de Espinoza, Olivas’ niece, told the Times that she believed her uncle threw himself off the bridge “in desperation over the deportation” because he had had trouble finding work in Mexico. The bridge is just yards from El Chaparral, the main border crossing.

The story is getting international attention in light of the release of new, stricter immigration guidelines released Tuesday by the Trump administration.

Images on Facebook show Olives after the fall on his back next to a plastic bag with his belongings.

A native of Sinaloa, a violent state in Mexico and stronghold of a major drug cartel, Olives died of a heart attack and concussion, according to the BBC.

Witnesses said Olives was shouting that he did not want to return to Mexico and seemed to be in severe distress, the BBC reports.

A statement from the Department of Homeland Security states that Olivas was deported from the U.S. at least six times.

nothing to do with trump, the people who claim it is are pathetic racists and abusers with no value to humanity

Our forum rules require civil discourse; namecalling and insults to others here is prohibited.  Saying those who disagree with you or ciriticize Trump are "patehtic racists and abusers with no value to humanity" has no basis in fact and is insulting and racially offensive.  Those who repeatedly violate our rules can be banned though we don't like to do that.  Please respect the rules in the future.  You're free to disagree and point out flaws in others' arguments, but not to denigrate them personally.

Abuse has nothing to do with sex, high taxes are abusive to people as it hurts there spending and life style, pushing philosophies or ideas on people without their consent is abusive. Taxing citizens to provide for non citizens is in my opinion abuse. Ever heard the term drug abuse, alcohol abuse?

I have seen more than one item here calling people who support Trump or certain policies racist, xenophobes, bigots, deniers, misogynists, etc. That is allowed?

Atkins said. “It shows that he either doesn’t understand – or simply doesn’t care – that what’s he’s doing is akin to telling girls that they have to use the boys’ bathroom, and vice versa" - that was a personal attack against jeff sessions.

Your site your rules, why not hold ALL to them

Olivas (not "Olives") had been deported at least six times and was turned back on yet another entry attempt, and it's the newcomer Trump's fault? No. His niece said that he jumped because he had had trouble finding work in Mexico. Is that also Trump's fault, Enrique Morones?

police and they are unable to work without ID. Other times there just isn't any work to be had.

This many apparently did have work as a gardener in the U.S. and now he's left with children with no parent left.  If he hadn't been deported he would be alive, probably working as a gardener still and his children would have a father and future. So yes, that is the fault of the U.S. government in a sense.

About the name error.  I went in and changed it.  Sometimes Miriam types too fast and Word's spell check doesn't pick it up because olives is indeed a word.