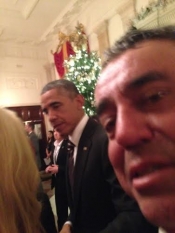 “Gracias, Mr. President. Congress, now it’s your turn,” an editorial written by Morones, was published in Roll Call on Capitol Hill and is reprinted below in full, with permission:

December 10, 2014 (Washington D.C.) -- As I sat in the Del Sol High School gym, I saw people all around me in tears of joy following President Barack Obama’s announcement of doubling down on immigration executive action. A day later, I witnessed the exhilaration of a 6-year-old Guatemalan refugee who had just been released from immigration detention as he spoke with his father about their reunification.

But these moments of celebration are bittersweet, as they’re only temporary fixes. What we really need is for Congress to take decisive action to comprehensively reform our immigration system to avoid the sort of piecemeal patches that landed us here, and which limit the ability of millions of our neighbors to participate fully in our society. Unfortunately, we know that there are those in Congress and on the far right who will oppose every step of immigration reform. They are defying the majority of the American public, which supports humane and inclusive immigration policy consistently in national polls — a recent survey showed more than 80 percent of Americans support some level of legalization for undocumented immigrants if certain conditions are met.

The president’s executive action will allow millions of human beings to come out of the shadows — it also forces Congress’ hand. Our representatives really just have two choices: they can act now before the end of the year, or they can act early next year, with the new Congress.

Failure to act should not even be considered an option. Every day that we lack humane immigration policies, two people die crossing the border via the few avenues available: traversing deserts, over mountains, and crossing rivers. Whatever happened to “give me your poor, your tired, your huddled masses”? Does that not apply to people who are brown?

I would challenge members of Congress and others who would use convenient talking points such as “we are a country of laws” to recall our country has previously had laws allowing child labor, prohibiting women from voting and allowing slavery — some laws are immoral. And those who say “you should get in line” would do well to remember that when previous groups of immigrants arrived on our shores there was no defined process, people just came. Likewise, for most of today’s migrants, there is no line. Both sides of the aisle have had plenty of time to act on immigration reform and both parties have had majorities in Congress that would have enabled passing legislation. We’ve had enough of finger pointing and messaging spin. No más! It is time to act.

I ask that members of Congress join the majority of the country as we seek humane immigration policies. The whole world is watching. From Missouri to Murrieta, we’ve seen the worst of the American spirit. Now, from D.C. to San Diego, let us show the world our best.

Enrique Morones is the president and founder of Border Angels, a humanitarian group saving migrant lives. He is the 2009 recipient of Mexico’s National Human Rights Award, the 2010 California Legislature Spirit Award, and was named one of country’s 100 most influential Latinos by Hispanic Business Magazine. He also founded Gente Unida in 2005 to denounce and expose hate groups.

From a common thug to the savior of "his" people. Enrique must be beside himself.