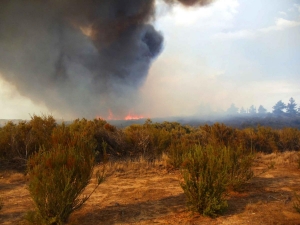 “My daughter in law and grandkids saw the strike start the fire on their way home from school,” said Donna Tisdale. The lightning struck next to a neighbor’s home and burned onto another neighbor’s property, she added. “Border Patrol agents went door to door to alert neighbors and let folks know that certain roads were being closed temporarily.”

Air and ground crews including from Cal-Fire, the Bureau of Land Management, and Campo Reservation Fire Department soon brought the blaze under control , halting it at around 20 acres. San Diego Sheriff and California Highway Patrol also responded.

“One neighbor across the hill said SDG&E showed up saying they wanted to make sure they did not start the fire,” Tisdale said, adding that the lightning may have struck a transformer.

No injuries or structural damage were reported.