Update 6:40 p.m.  The Border Fire has been halted at 120 acres, Cal Fire's Nich Schuler said.  Firefighters will remain on scene through the night mopping up hot spots.

Update 2:40 p.m. Forward spread has been stopped, Nick Schuler of Cal-Fire reports.  He added that Cal-Fire was incorrect in its earlier report; after further mapping officials have concluded that the fire did not cross the border. 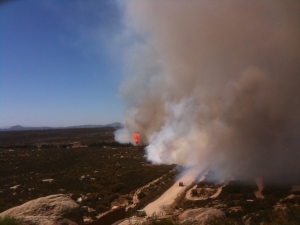 “It is still very active and we are sending five engines into Mexico south of Boulevard due to the continued threat,” Cal-Fire battalion chief Nick Schuler told East County Magazine. Winds are now blowing to the north, he added.

The fire is now 65 acres, encroaching toward the Tierra del Sol area. No evacuations have been ordered, however Sheriff’s deputies have knocked on doors to alert residents at several homes of the fire’s proximity, a Sheriff media representative confirmed. Air power is attempting to contain the fire to the border area. 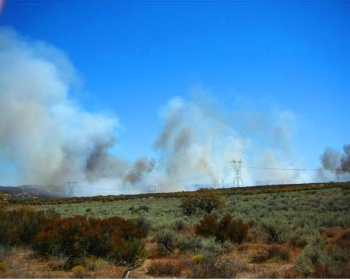 "The Southwest Powerlink runs right through there and it was interfering with water drops, from what I heard," Donna Tisdale, chair of the Boulevard Planning Group, told ECM.  "The Sheriff's helicopters were having to squeeze in to drop water between the Powerlink and the border."

Tisdale said she went down to the border when the fire began, arriving before firefighters.  "It started immediately east of Jardinas del Rincon, a residential area in Mexico in the municipality of Tecate," she said.  Due to thick, black smoke from burning oaks and creosote, Tisdale added that she could not tell if structures in Mexico had burned. 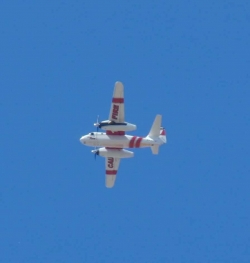 If you are not yet signed up to receive FREE Viejas Wildfire & Emergency alerts via email, sign up at the top right side of our homepage. We recommend signing up both your home and office e-mail addresses. We do not send any junk mail; you will only receive wildfire/emergency alerts plus a weekly copy of East County Magazine's newsletter. Our alerts come by email to keep you informed even if phone lines or cell towers burn down.

You can also follow ViejasAlerts on Twitter.com to receive short text messages on your mobile device, wherever you are when an emergency occurs. 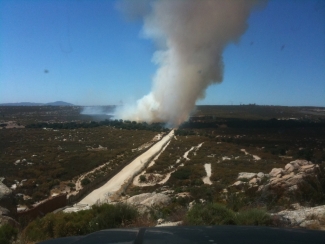 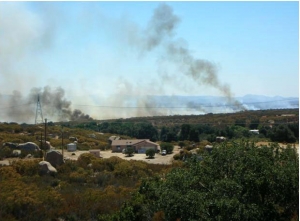