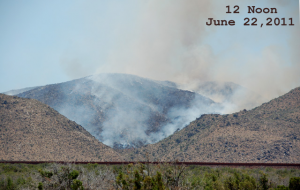 Update 12:10 p.m.  The fire has jumped to 75 acres and is now burning on both sides of the U.S.-Mexican border along the border fence, Cal-Fire engineer-paramedic and public information officer Tom Piranio with Cal-Fire informs ECM.  "It's in a very remote area and there are no structures nearby," he said, adding that airtankers and five fire engines are assigned to the blaze, which is not expected to pose a threat to inhabited areas.

June 21, 2011 (Jacumba) – A vegetation fire that began this morning off I-8 near In-ko-pah Road in San Diego’s East County is holding at five acres as of 11 a.m., Battalion Chief Nick Schuler with Cal Fire reports. 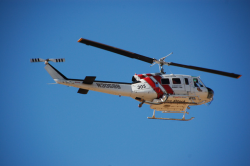 The fire is burning in an area inaccessible to ground forces, however firefighting aircraft including four air tankers plus helicopters are making good progress toward containment. No structures are threatened and there is no impact on traffic, Schuler said.

The fire was reported by the U.S. Border Patrol at 7:30 a.m. Cause remains under investigation.

Note: An earlier release of ECM's mistakenly referred to the fire as in Dulzura; it is actually in Jacumba. We regret the error.