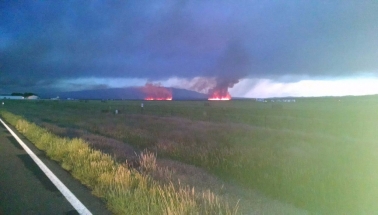 September 2, 2017 (Dulzura) – The Border Fire south of Dulzura is now 75 percent contained and has charred an estimated 130 acres, according to Cal Fire.

The brush fire began yesterday along Highway 94 near Marron Valley Road.It is currently spreading to the northeast and is not expected to impact populations. Firefighters will remain on scene constructing containment lines and  mopping up hot spots. 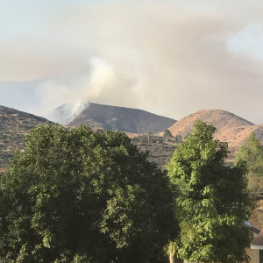 Approximately 220 fire personnel have been battling the blaze, which has utilized 20 fire engines, 10 fire crews from multiple agencies, 2 helicopters and 3 bulldozers, as well as 7 water tenders.

A Cal Fire helicopter had a hard landing yesterday but the pilot escaped without injury.  Cause of the hard landing is under investigation.

Cause of the fire has not yet been determined.

Sign up for free East County Wildfire & Emergency Alerts via email at the top right side of our homepage, and you can also receive a free weekly e-newsletter with top news and events. You can also follow EastCountyAlert on Twitter for short text alerts on your mobile phone.