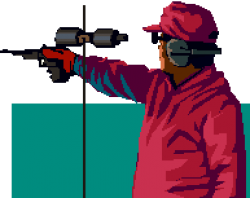 August 20, 2014 (San Diego’s East County)—A 20-acre wildland fire on the border caused by target shooting last weekend has prompted CAL-Fire to issue a stern warning: shooting on state lands during these extreme drought conditions is prohibited—and if you start a fire, you can be held liable for firefighting costs.

Fuel conditions are at critically dangerous levels across San Diego County due to the multi-year drought.  On June 20th, Cal Fire issued a high fire hazard proclamation making it illegal to discharge a firearm in areas under Cal Fire jurisdiction.

Under state law, anyone who negligently or in violation of the law sets a fire, or allows a fire to be set, is liable for the fire suppression costs to fight that fire, as well as any rescue or emergency medical services needed.

So if you want to go target shooting, the cost of going to a designated shooting range is minimal compared to the potentially enormous cost you could be responsible for if target shooting illegally on public lands ignites a wildfire.