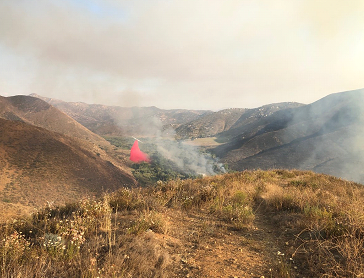 Update July 15, 2019:  The Border Fire has been 100% contained after burning 100 acres on the U.S. side of the border, Cal Fire reports.
East County Wildfire & Emergency Alert Service
July 13, 2019 (San Diego’s East County) – The #BorderFire which charred over 650 acres in Mexico before jumping the international border yesterday in San Diego’s East County is now 85 percent contained, after burning 100 acres in the U.S.
Cal Fire reported yesterday that the fire crossed the border near the Barrett Truck Trail south of Dulzura,
Last night, the fire was flown using new infrared technology, Cal Fire announced on Twitter, stating, “The intel gathered is a huge asset for fire operations; check out the awesome video at http://www.tinyurl.com/BorderFire.”

As a retired FF that was on the line of many of these type fires, I didn't really get much of anything about infra red and what it does from this article. A night time view without the affects of day time weather. What was the "old technology GP? Tell me more, tell me more

But hopefully we can learn more soon.