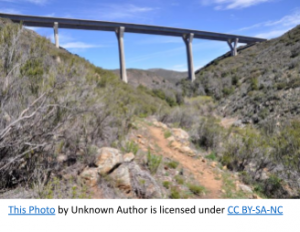 At approximately 7 a.m., while driving eastbound on I-8, a Border Patrol agent observed a woman standing on the rails of the Pine Valley Bridge near the westbound traffic lanes. The agent quickly turned around and was joined by an off-duty firefighter. The agent and firefighter physically removed the woman from the edge of the bridge and secured her for her safety, according to a press release issued by U.S. Customs and Border Patrol.

The California Highway Patrol  was contacted and responded to the scene. The woman was transferred to CHP for care and assistance.

“A tragedy was avoided today thanks to the efforts of these heroes,” said Chief Patrol Agent Aaron Heitke. “Even though border security is our primary mission, our agents respond to a multitude of significant events in the areas they patrol and consistently rise to the challenge.”

The Pine Valley Creek bridge, also known as the Nello Irwin Greer Memorial Bridge, is 440 feet high with a 450-foot span, one of the highest bridges in the U.S. Named for the engineer who found a way to spare the region’s pine forests from destruction, the cantilevered bridge has tragically been the scene of many suicides through the years.

If you are suffering from depression, there is help available.

You can also call the San Diego Access and Crisis hotline at (888) 724-7240. Know the warning signs of suicide, and seek immediate help when you hear or see any of these behaviors. You could save a life.