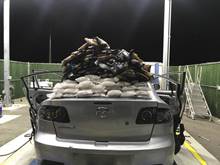 Photo:  Agents pulled 114 packages of meth that was hidden inside a small car.

August 2, 2019 (Campo) -- U.S. Border Patrol agents arrested a man Thursday night who had 114 packages of methamphetamine hidden inside his vehicle.

At 7:35 p.m., agents at the Interstate 8 checkpoint observed a grey Mazda 3 approach.  As agents questioned the driver, a Border Patrol K-9 team performed a sniff of the vehicle, resulting in an alert.  The agent then sent the male driver to secondary inspection for further examination.

While in secondary, a K-9 performed another sniff of the vehicle, resulting in an alert near the trunk compartment.  Agents searched and discovered 114 plastic-wrapped bundles concealed in the vehicle’s door and rear-quarter panels.

The bundles contained 119 pounds of methamphetamine valued at $237,700.

The driver, a 33-year-old U.S. citizen, was placed under arrest and the vehicle was seized by the Border Patrol.  The narcotics were turned over to the Drug Enforcement Administration.