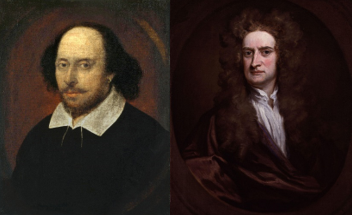 Some of history’s greatest works were created during past epidemics

Photos: Playwright William Shakespeare and physicist Isaac Newton are among those inspired to creative endeavors while in quarantine (public domain images via Wikipedia)

March 24, 2020 (San Diego’s East County) – Creativity can blossom out of hardship. As you’re hunkered down at home due to the COVID-19 epidemic, consider this: during historic epidemic eras, some of the world’s most famous writers, artists and scientists drew inspiration for their greatest works. We've provided a few of their stories, along with some links to free online classes in writing, art, science and music to spark your own creative impulses.

When the bubonic plague closed Elizabethan theatres in 1606, actor and theater shareholder William Shakespeare found himself out of work during the quarantine. He is believed to have composed some of his greatest plays that year, including King Lear, Antony and Cleopatra, and MacBeth as well as taking up poetry.

Isaac Newton’s theory of gravity had its seeds in the physicist’s self-quarantine during 1665. His studies at Cambridge University in England were cancelled due to the bubonic plague, so Newton retreated to his family estate in the countryside where he produced some of his best works. There, he wrote papers on calculus and developed his theory of optics while playing with prisms. His theory on gravity also began while in confinement during the epidemic. While there is no evidence behind the folk tale of an apple hitting on the head and inspiring his gravitational levitations, he reportedly did gaze at an apple tree outside his window.

Artist Edvard Munch, best known for his painting, the Scream, caught the Spanish Flu in 1919 while living in Norway, but survived. His painting, Self-Potrait with the Spanish flu, is one of several paintings and studies he created while documenting his battle with the disease that killed 50 million people around the world.

During the current novel coronavirus (Covid-19) crisis worldwide, many musical artists are producing works while isolating at home.  At least 65 songs with Coronavirus in the title have popped up on Spotify. Neil Diamond has created a video at home of his new coronavirus-themed parody of Sweet Caroline. Many artists are also releasing play lists of suggested songs to listen to while in home isolation during the current crisis, including some inspirational and upbeat songs, as well as more moody and reflective pieces.

If you’re feeling inspired to try your hand at unleashing your own creativity while in confinement, here are some free online resources: