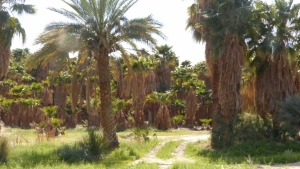 November 25, 2018 (Borrego Springs) – Borrego Springs is under a state mandate to submit a plan early next year to reduce the desert community’s water consumption by 75 percent by 2040. The town relies 100% on groundwater – and it’s using far more than is being replenished through rainfall.  Citrus and palm farms use 70 to 80 percent of Borrego’s water, so the only way to meet the staterequirement and save the town’s only water supply is to eliminate some or all of the farms.

Proposition 3, a statewide ballot initiative on the November ballot, would have provided $35 million in fundsspecifically earmarked to buy farmlands in Borrego Springs, remove the water-hogging citrus and palm tree crops, and make the properties part of Anza-Borrego Desert State Park. But Prop 3 failed by a narrow margin, with 48.5 percent of votes in favor and 51.5 percent opposed.

An article in the Borrego Sun calls the defeat “frustrating.”

A San Diego Union-Tribune article goes further, stating, “At stake is the very future of the community.”

At a community meeting last week held by the Borrego Water District, a standing-room-only crowd included residents voicing fears over falling property values, inability to sell homes, and concerns that jobs may dry up.

If nothing is done, the town could run out of water completely and meanwhile, be forced to invest in drilling into deeper, ancient water that would require costly filtration to make it drinkable.

Geoff Poole, general manager of the Borrego Water District, told concerned citizens that a 75 percent water use reduction is “scary.”

So what are the options now for San Diego County and the Borrego Water District, the two entities responsible for coming up with a plan to show the state how that water reduction will be met?

One proposal is to put the initiative back on the ballot in 2020 and invest more money to make sure that voters know what’s at stake in Borrego Springs here in San Diego County’s easternmost area—a town that attracts snowbirds from across the nation who flock here for the warm winter sunshine. Borrego is also a mecca for art lovers, stargazers as an international dark skies designated community, fans of the Borrego Days Desert Festival and Parade, and visitors coming to the Anza-Borrego Desert State Park, which does not operate any inns or indoor lodging options of its own. Although many residents are low income, the town has also long attractedmovie stars and titans of industry seeking a relaxingrespite in the desert.

The Borrego Sun speculates that Prop 3 may have failed because of opposition by some voters to bailing out farmers in the Central Valley, where the land is subsidizing and canal repairs are needed due to damage from largeagri-business farmers over-pumping groundwatersupplies.  The bond also failed to guarantee state oversight to assure that grants paid to farmers would be used as promised, and supporters of Prop 3 may simply have not spent enough on TV ads to explain the dire need to help save the community of Borrego Springs.

Meters will be placed on all private wells to measure exactly how much water they are pumping out of the aquifer and conservation by residents and non-farming businesses will be encouraged – but that’s only a drop in the bucket compared to the massive amounts of water being used to irrigate crops in desert terrain.

Other options include seeking funds to buy out farms from other sources, such as through legislation and grants. A million dollar grant was obtained last year to study the economic impacts on residents and workers as water levels continue to fall, with no end yet in sight.

California's tragically late groundwater regulation law at least added a player to game, the clock. If the community process fails, metering and a 75% reduction in water usage is going to gore every ox, except maybe of campers seeking a wilderness experience. It is tragic, but honestly is the world doing anything differently? Trump pulled the US out of the Paris Accords, which were something, yet not much more than a fig leaf for politicians who actually accept that climate change is real. In a sense, the lie of liberal pols ("we can do something about climate change") is worse than that of conservative ones ("heads in the sand"). Maybe there is nothing to do but prepare, emotionally, for the devestations of human stupidity. We may not be up to this kind of political challenge, and will just choose to ride our sunk costs and endless greed right down into the dry ground.
Should state taxpayers be responsible (via costly bonds) for buying off growers who are irresponsibly taking the bulk of water to grow crops they profit from?

climate change reduced rainfall and before many of the homes there were built.  They may not have been irresponsible, there may simply have been no way to predict how the area would develop and rainfall would drop over the long-term. Also when they bought the land, the law allowed them to pump as much groundwater as they wanted or needed.  Now the state has enacted a law that changes this, requiring the community to slash water use 75%. It's unprecedented. When the state seizes land by eminent domain for highways, they have to compensate land owners.  There are some similarities here; the state is ordering farmers not to draw down water that they previously had a right to use. So arguably that state should owe the farmers something, at least a partial compensation.

That's different than the Central Valley, where large agribusiness growers failed to heed conservation calls and knowingly overpumped groundwater, causing subsidance and damage to infrastructure in the region owned by others.

I think Borrego needs its own ballot initiative separate from the  Central Valley farmers, since the issues are not the same.

Normally if a farm fails to be profitable, the family/owner can sell the land for other uses such as housing and recoup some of their money.  But when there is no water and large housing development permits are being denied, they truly have no option other than to take a total loss, or donate the land to be part of the  state park system and settle for just a tax writeoff, while losing their life's investment on farms that in some cases were multi-generational.