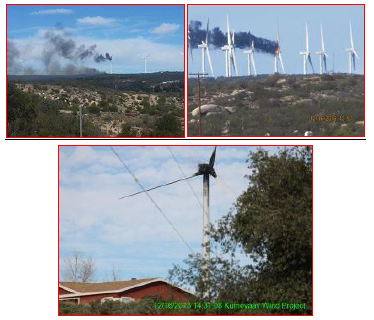 The proposed major use permit for Torrey Wind (formerly known as San Diego Wind) will be on the Boulevard Planning Group’s agenda at its August 2nd meeting at 7 p.m.  (View agenda)

At the July 12th meeting of the planning group, when asked if anyone supported the project, no one raised their hand.  Planners and community members have previously raised objections over several other wind projects built and in the pipeline, citing the cumulative impacts on wildlife habitat, public health and safety, and quality of life.  Fire is also a big concern, since a wind turbine at the Kumeyaay Wind Farm burst into flames in 2013, sparking a brush fire that threatened a nearby home and led the Campo tribe to cancel its proposed Shu’luuk Wind project.

The turbines proposed by Torrey Wind would be 4.2 megwatts, far larger than even the massive wind turbines now operating at Tule Wind.   Near existing wind projects, residents have complained of infrasound impacts on health as well as  noise, flashing lights, distracting blade flicker and visual blight.

An environmental impact report should consider the cumulative effects of multiple projects on the region, according to Donna Tisdale, chair of the Boulevard Planning Group.

If you would like to submit comments in this project, you can contact the project manager at Brownwyn.brown@sdcounty.ca.gov or call 858-495-5516.

"[ . . . ] I have personally had my ears hurt when was close to some of the big turbines in Ocotillo."

Here is the barrier between delusion and science.  Instead of raving irrationally, a scientist would measure the distance to the turbine, the blade RPMs, and the sound pressure before making a report.  Would you believe someone who says automobiles are dangerious because he stood in front of a speeding car and got hospitalized?

Farboud and colleague state that “... there is an  increasing body of evidence suggesting that infra-sound and low frequency noise have physiological

effects on the ear.”  It goes on to talk about how infrasound and low-frequency sounds at the Ontario wind project were worse inside than outside causing ear pain, headaches etc.  driving some residents to sleep outside in trailers etc.

One of the studies you cited elsewhere was funded by the wind industry. That calls its credibility in question, same as health studies funded by the tabocco industry or polluters. A problem is that the government has failed to provide funding for neutral, independent studies. But we should not the overwhelming anecdotal evidence at dozens or hundreds of these projects around the world where neighbors all report similar symptoms.

Not everyone suffers at the same level. I happen to have ear canal dysfunction that acts up when I fly for example; the problem is similar near wind turbines.  I would go insane if I had to live near one, feeling like my ear is going to explode. I don't like seeing people who dismiss those with symptoms as crazy just because nobody has been willing to fund studies not paid for by the wind industry. If we aren't wiling to fund research to determine safe distances from wind turbines then we should not be building them anywhere near homes.

Referring to complaints by people with  physical pain as "delusional ranting" is disrespectful. Any further comments insulting victims will be deleted.  It should be possible to discuss the science or lack of it without violating our site rules requiring courtesy to all.

I did some online hearing testing on myself at several Internet sites for cross referencing purposes, and here's what I found.Keep in mind the average human can detect sound ranging from 20 Hz to 20,000 Khz. Me: 10 Hz inaudible. At 20 Hz the sound is barely audible, yet can be heard as a low deep, bass like rumble. At 24 Hz the bass notes become more noticeable. At 36 Hz the sound is very noticeable. Sound is perceived all the way up to 14,000 Khz. Not bad for a senior citizen. Some people can hear sound ranging from 12 Hz to 28,000 Khz in laboratory testing. Sound perception is also dependent upon decibels, aka intensity, or volume. Infrasound below 20 Hz typically cannot be 'heard' but can be 'felt' by humans. This same sound is used for communication by whales, and elephants for example. Infrasound can also be produced by weather events, earthquakes, etc. So yes, it's real and it can affect people's health in various ways.

Our east county WILDerness Areas are not supposed to have man made intrusions on their natural resources.   But they already do!  One of their most treasured attributes, their expansive undisturbed 360 degree views of the surrounding mountains, valleys and desert, have been ruined by GIGANTIC industrial wind turbines and their supporting structures that are visible from local hiking trails, campgrounds, and areas many miles away, both day and night.   VERY SAD for those of us who only have memories and photos of how beautiful and WILD our public lands used to be!

There is a lot of documentation on the negative health impacts of turbines which we have covered through the years. I have personally had my ears hurt when was close to some of the big turbines in Ocotillo.  We are not going have people on our site likening the poor people victimized by wind turbines sited too close to homes to witches.  Apparently you aren't aware of the cancer cluster among Indians near the Campo wind farm on Kumeyaay land.  A local university found that the only explanation for it would be the turbines. They recommended a broader study but there was not funded. One house had stray voltage a thousand times higher than normal coming up through their floor  In that house everyone had cancer, even a two-year old.  I know you are passsionate about climate change and so am I, having studied under some of the world's top climate scientists. But we can't have "green blinder" on and ignore the suffering that wind turbines are causiing. There are also physical impacts on animals living near turbines. Dogs in Ocotillo would whimper and dive under beds; their ears hurt. My ears hurt though  not from noise, it was the infrasound. In one community, a group of scientists moved in to debunk infrastructure and ended up concluding it was real after they experienced physical harmful effects themselves.  That was in the midwest somewhere.  Coyotes where the stray voltage in Campo was highest were witnessed jumping into trees to escape it. The flashing lights were coming right in our photographer's bedrom windows all night long, along with blade flicker. Infrasound is a real problem, but only one of many that can cause physical problems.  Lack of sleep alone from having lights flashing on and off all night into your window is an issue for many in Ocotillo., where the bighorn sheep have left and come back only when the turbines are down for maintenance for several days or more, according to residents out theere.

A foul odor blowing in the wind?