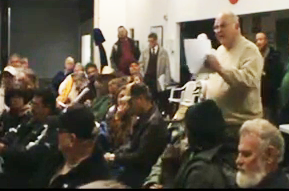 February 17 is deadline for public comments; citizens are urged to participate

February 11, 2014 (Boulevard)--An overflow crowd attended the February 6 meeting of the Boulevard Planning Group to hear a detailed presentation by the County of San Diego and Soitec about four massive solar projects planned for the community.

But the show-stealer proved to be Jacumba resident Howard Cook, chair of the Jacumba Sponsor Group.  Cook fired off a list of  glaring omissions from the water use estimated by Soitek’s consultant, Dudek.  These were not minor components; among the omitted items were a substation, concrete-making plants and rock-crushing operations--all water intensive activities, raising serious questions about the competence and integrity of an environmental consulting firm with a record of severely under-estimating water use at other recent projects.

Dudek, it should be noted, has several underestimated water use on other recent projects including Ocotillo Wind, where water use was several times higher than Dudek predicted.  Amid California’s worse drought in recorded history,  residents are urging the county not to risk the future of their water source and the ecosystem based on water estimates from a company with an unreliable record.

The citizens in attendance were unanimous in their opposition to the projects, which would encompass almost 1,500 acres in Boulevard with almost 7,500 solar trackers, each measuring 30 feet tall by 48 feet wide (see initial story. ) Boulevard Planning Group reaffirmed its opposition to the solar projects due to lack of need, environmental impacts, misrepresentation by Soitec, water issues and fire hazards, among other considerations.

Robert Hingtgen from the County’s Planning and Development Services, and several of his colleagues, presented an overview of the environmental impact review (EIR), which was prepared by Dudek, an environmental consulting firm that according to the website, offers these services to its clients: “…help clients move projects forward through the complexities of regulatory compliance, budgetary and schedule constraints, and frequently, conflicting stakeholder interests.” (http://www.dudek.com).

“We know there is a lot of opposition to this project,” said Hingtgen.

Hingtgen explained that once Dudek completed the EIR, County staff then reviewed it. He emphasized that now is the open period for public review, which concludes on February 17 when all comments are due. He encouraged anyone with concerns to participate in the public comment process at http://sdcounty.ca.gov/pds/ceqa/Soitec-Solar-EIR.html

He said after all comments are in, County staff and consultants will review each one and formulate responses; the EIR will then be reevaluated for recirculation. From there, it will proceed to a hearing and the County Planning and Development Services will make a recommendation. He said draft findings (major use permit findings, CEQA findings) would be overriding considerations on if the plan moves forward.

“The County must balance economic, legal, social, technological or other benefits against avoidable environmental risks. If the benefits outweigh the risks, adverse effects may be considered ‘acceptable’.”

The EIR addresses several concerns, along with scenarios for mitigation, including:

Land use is also addressed, specifically how the projects could physically divide the community.

Although concerned about all of the issues addressed, the community members in attendance were most vocal about impacts to groundwater.

Jim Bennett of the County explained the large amount of water needed for construction versus the smaller amount needed for ongoing maintenance. Because the current groundwater could not meet the construction needs,  some water would be imported from the Pine Valley Mutual Water Company, the Jacumba Community Services District, and the Padre Dam Municipal Water District,  But huge quantities—just how much is a matter of dispute—would be pumped from the local aquifer.

“There will be a maximum pumping threshold,” Bennett explained, in light of concerns about water drying up. “Pumping would be required to cease if wells drop 10 feet.”

Bennett’s slide presentation explained the amount of water that would be used in the community during construction.

The EIR states that fire concerns are less than significant. Hingtgen explained that fire protection plans will be implemented and that the county would contribute equipment and funds to local emergency response capabilities. They would also devise a traffic control plan and alternative access, if required.

Alternatives to the Projects

Hingtgen outlined the proposed alternatives to the project as presented, which can be found in Chapter 4 of the EIR. They include:

2. Reduced Tierra del Sol and Rugged; no LanEast and LanWest

Community members asked the County and Soitec representatives questions for 90 minutes, most focusing on water concerns and if there would be any financial contingencies if wells dry up.

Hingtgen clearly stated that the community of Boulevard has value, but there are no financial contingencies. He did say that the questions being asked were very valuable.

The crowd paid rapt attention as Jacumba Sponsor Group Chair  Howard Cook, speaking as an individual, grilled Soitec and County staff on the number of major project components that were apparently not included in the estimated water use, including roads, gen-tie lines, two cement making and rock crushing operations that would use “a hell of a lot of water,” Cook pointed out.  (View video of his presentation and the exuberant audience response.)

An audience member shouted out, “You go, Howard!”  Cook also noted that SDG&E ECO substation in Boulevard used three times more water than the company predicted, an error which was attributed to the dry soils in the Boulevard area.

A staffer called Cook’s comments “effective.”  Cook  asked “Can I ask you why the County didn’t catch this?”  County staff provided no answers to his questions but promised to research the points he raised.  Cook concluded, “There’s enough questions there for you guys to go back to the drawing board.” Cook later provided ECM with his written comments on the EIR, which raised numerous other concerns including the experimental nature of soitec's technology; it's only operational facility in the U.S. is not yet operational and has had some problems with modules, according to Cook.

Jim Pelley from Ocotillo said Dudek also did the water estimate for the Ocotillo Express Wind Facility.  Water use there was five to six times higher than Dudek estimated, said Pelley. A Dudek represent was present but did not contradict this statement. Neither Dudek nor Soitec offered any explanation for the bulk of these missing massive water uses.

Soitec was also reluctant to talk about its problematic 1.5MW Newberry Springs Solar project that they now claim is a test site, when a press release on completion of that site said nothing about it being a test site, and there is conflicting information on when that site went online.

Donna Tisdale, chair of the Boulevard Planning Group, emphasized several times that she needs all of the comments and questions raised to be submitted in writing for public comments to the EIR.

Residents of rural East County have started a petition asking Supervisors to oppose the Soitec projects, which you can read or sign here.

It's important to note that the project's violation of the five aesthetic criteria (listed in the article) were judged by the county to be "significant and unavoidable" and, therefore. "unmitigable." Now, this would be the kiss of death for any private development, but,...BUT,...not when it comes to progressive public policy. These significant and unavoidable "impacts" could, according to county rep. Robert Hingtgen, be overruled in the interest of furthering certain "legal, social, and technological benefits." In other words, for government, the rules and laws that regulate and constrain the rest of us, don't apply.