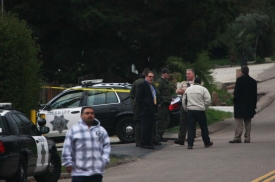 January 16, 2012 (El Cajon)—A 12-year-old boy has died of stab wounds in a crime that has shocked a neighbors on Royal Road in the unincorporated area of El Cajon.  The  suspect is a 10-year-old boy, Lt. Larry Nesbitt with the Sheriff's Homicide Detail confirms.

A neighbor, Derek Gorton, 18, told 10 News that the boys were close friends, but indicated that the younger child suffered from severe emotional issues. “Even though he threw temper tantrums, we never thought he’d do anything like this,” he said.

“Sometimes he was a nice kid, and sometimes he was not,” a young neighbor boy riding his bicycle told East County Magazine.  “He went to my school, W.D. Hall.”

10 News reports that neighbors indicated the boy had recently been put on new medication for anger issues such as screaming but not for violent acts.  Gorton’s father, Brian Richeson, said the boy’s mother was “the best mom I’ve ever met” and that she had been proactive in trying to deal with her son’s emotional problems.

The identity of the victim has not yet been released by the Medical Examiner's office. The suspect's name will not be released due to the child's age.

Killings by children this young have been rare in San Diego County.  The suspect is expected to be processed through the juvenile justice system due to his youth.