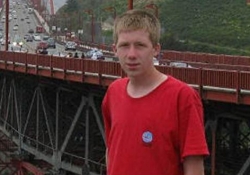 December 22, 2009 (Anza Borrego) – San Diego Sheriff reported on December 18 that Mickey Guidry, 16, has been missing since November 26th when he ran away from his parents’ home in San Marcos. Guidry reportedly took his parents’ 1995 Jeep Cherokee without permission. On November 30th, the Jeep was located unoccupied in an extremely remote area of the Anza Borrego Desert.

Sheriff’s officials believe Guidry drove the Jeep to the desert, where it became disabled, then left on foot. Aerial and ground searches of the area have failed to locate Guidry. He is 5’ 9 “ tall and weighs 155 pounds, with blue eyes and brown hair. He may have been wearing blue or black shorts or Dickies jeans with blue high-top tennis shoes.

This is Mickeys mother.. There IS no explanation as to why the SD Sheriffs didn't bother to start looking for him until 3 weeks after I reported him missing~ they tell me that they "thought he'd been found already"... but they never verified it.
He left on foot from the Pinyon Mountain area (the dropoff), which was over 10 miles of pretty rough terrain, very remote.. His last contact with anyone was Nov 27.. he had no id, no money, no clothes (all of those things were left in the car). He is familiar with Anza Borrego, but not much of the Pinyon Mtn area because the terrain was too rugged for us to explore... If anyone has any information, please call the SD Sheriffs Dept. Thanks

What area of the ABDSP do they think he's in so I can keep an eye out for him? Is he knowledgeable about the desert or the outdoors?

Good questions, but the only info I have is what we posted.  I suggest you call the Sheriff's number listed in our story.