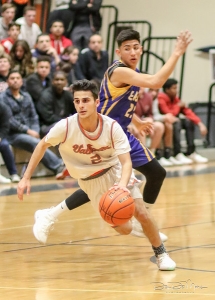 Story by Liz Alper
Photos by Don De Mars
February 13, 2019 (El Cajon) - If any team in the county deserves a spot in the playoffs, it’s Valhalla boys basketball.  The Norsemen knocked this season out of the park, going 25-3 overall and undefeated at home (11-0) and 9-1 in league play.  Tonight in the first round of the CIF San Diego Section boys basketball playoffs, the orange, blue and white faced the Eagles of Southwest El Centro. 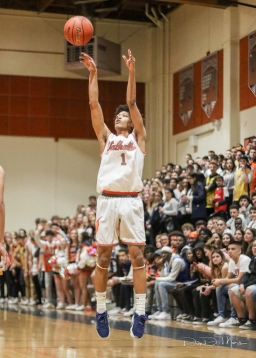 Picking up in the second quarter, the Norsemen ran a tight ship, up four.  But they soon racked up a whole lot more, thanks to a three from senior Domanic Safarta and a go-ahead from senior Jordan Gaines.  Valhalla was cruising for a while until the end of the half when the Eagles soared back into the game via free throws and good opportunities at their end of the floor.  The Norsemen still held on to take a 43-37 lead to the locker room.

The Norsemen let their lead almost slip away in the third, but thanks to big man senior Evan O’Neill and a monster three from sophomore Joe Avalos, they stayed out in front.  Avalos got the ball rolling and the rest of the orange, blue and white followed, leaving the Eagles in the dust.  Avalos sunk another three and the Norsemen led by nine, 60-51, after three.
In the fourth, the Norsemen battled to keep their lead up and it worked, with Avalos hitting his third and fourth threes of the night to give the Norse their biggest lead of the night.  The Norsemen went on to win 82-62 and advance to the quarterfinals. 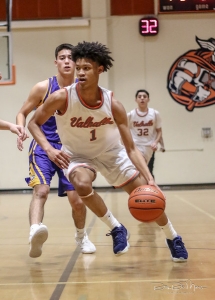 UP NEXT
The ancient inhabitants of Scandinavia will now face Sage Creek in the quarterfinals on Saturday.  Tipoff is at 7:00 p.m. at Valhalla.
Like our high school basketball coverage?  Donate to help support our coverage of high school boys and girls basketball throughout the playoffs!
Follow @ECMagSports on Twitter for live in-game updates!
Does your son or daughter play a sport at a level other than varsity?  Comment on this story or tweet @ECMagSports to request coverage!
Check out our sports section for more sports stories! 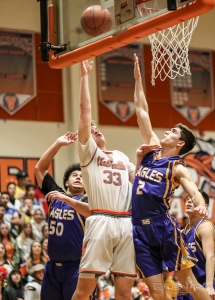