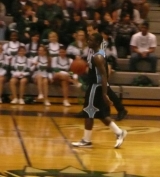 February 2, 2010 (La Mesa) - Last Friday's basketball game at Helix High School between the host Highlanders and the visiting Eagles of Granite Hills High School had its share of scoring runs by both teams. The only problem for Helix was that Granite Hills' scoring runs were longer in duration as the Eagles prevailed with a 64-55 win.

The first quarter ended with the Eagles taking a 15-11 lead aided heavily by three-pointers. Kyle Snyder connected on two three-point shots from beyond NBA range, while teammate Garrett Larch-Miller added another three pointer to help Granite Hills take a 15-5 lead. Kenny Keys and Sam Merideth helped Helix finish the quarter on a 6-0 run to keep the game close.

Andre Lewis took over the second quarter for Granite Hills in such a way that Helix, in spite of a valiant effort later in the game, could not recover. The Eagles erupted for 25 points, with 10 coming from Lewis, to take a 40-21 lead at
halftime.

Six missed free throws, all coming from two-shot fouls, hurt the Highlanders in the quarter and continued to hurt them throughout the game. They finished the game converting 14 of 31 attempts from the charity line, for a disappointing success rate of 45 percent.

In all fairness to Lewis, even improved free throw shooting by the Highlanders might not have been enough to help them pull off an upset. Helix could not slow down Lewis, who led all scorers with 25 points and took over the game in a profound way that statistics cannot measure.

Helix came out on fire in the second half, and closed the deficit to five points, trailing 46-41 late in the third quarter. Keys and Jaylen Linson accounted for much of the Highlanders' surge. Also helping Helix was the absence of some key Granite Hills players for extended periods of time. Larch-Miller and Jason Gaines had to sit out for some time with foul trouble.

"I loved our aggressiveness in the first half, but it kills us when we lose one of our four guys to foul trouble like Larch-Miller tonight. That hurts us when we had to sit him," said Granite Hills' head coach Randy Anderson, "but Gaines in the third quarter, he's our top rebounder and that hurt. They got a bunch of second chance points down there in the third."

This is when Lewis once again took control of the game. He drained a three-pointer with 2:12 left in the third and added another just 24 seconds later to pull his team ahead 52-41.

"I was a little surprised they left me open; I thought they would double-team me," Lewis said about the two three-point field goals. 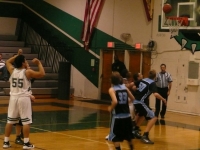 Granite Hills spent much of the fourth quarter playing 'keep away' from the Highlanders with their four corners offense. It prevented Helix from making any serious threat at a comeback, and allowed the Eagles to pull out a 64-55 win.

"The key to the game was to play good defense and control the tempo," Lewis said about the win, which gave gave Granite Hills a record of 16-4 overall and 3-0 in Grossmont Hills league play. Four of the Eagles' starters scored 10 points or more.

Keys led Helix in scoring with 16 points. With the loss, the team dropped to 10-8 overall; 2-2 in Grossmont Hills league play.