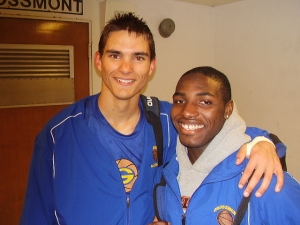 February 8, 2011 (El Cajon) - Friday night's (2/4) boys basketball game at Grossmont High School between the host Foothillers and the visiting Cougars from Steele Canyon High School was a critical game for the home team. Grossmont badly needed to win this game to avoid possibly falling three games behind Grossmont Hills League leader Helix. A 52-47 road loss to the Cougars on January 14 was also something they did not want to repeat.

The game started pretty much the way the Foothillers wanted it to as they dominated in the first half and led 36-18 at halftime. A resurgent Cougars team put together an impressive second half where they had a 9-2 scoring run in the third quarter and outscored the Foothillers in the second half 33-25. It was not enough however, to allow the Cougars to overcome the early deficit they were in as the Foothillers held on to win 61-51.
Shooting from three-point range was one contributing factor towards the outcome of this game. Desean Waters, Michael Wnek and Robby Nesovic connected on seven three-pointers for the Foothillers. The Cougars on the other hand, only connected on a total of four, accounting for a difference of nine points.
As to why the Cougars played so well in the second half, it's a matter of who you ask. Cougars' head coach Derek Stephens spoke of halftime adjustments and spirited play.
"Our energy level was a lot better in the second half and we were a little more patient offensively," said Stephens about his team's improvement after the intermission. Stephens also felt that the way the team played in the second half was valuable experience for his young squad. The Cougars only have one senior on their roster.
Waters felt that the Foothillers were not at their sharpest in the second half, "We just lost a little bit of focus that's about it," he said about the Cougars' second half surge.
Another huge factor contributing to the Foothillers' win was the play of Nesovic. In addition to leading all scorers with 20 points, he hustled for loose balls and made impressive plays, including a great pass to Ryan Green on a back-door layup.
Regardless of whom you ask, the win is huge for the Foothillers. They improve to 15-8 overall, 4-2 in Grossmont Hills League play. They also stay within two games of the league leader Helix, (17-5, 6-0). The Foothillers' next game is at home on Tuesday, February 8 against Valhalla.
Steele Canyon drops to 7-16 overall with the loss, 1-4 in Grossmont Hills League play. Their next game is at Granite Hills , also on February 8. The Eagles are  15-9 overall and 3-3 in league play. Michael Jordan led the Cougars in scoring with 16 points while teammate Danny Bwinika added 13.