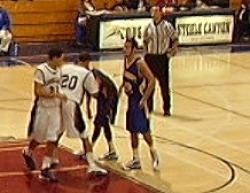 February 7, 2010 (Rancho San Diego) - Whoever coined the phrase, 'a win is a win', never met the Grossmont Foothillers' basketball team. If you knew nothing about the outcome of Friday night's game and observed the Grossmont players' demeanor afterwards, you would have been surprised to find out that they won. Although it's a game they would rather not talk about, the Foothillers survived their lackluster play and a late run by the host Steele Canyon Cougars to pull out a 47-36 win.

It's understandable that Grossmont would have a letdown after playing Granite Hills Wednesday night. Both teams were playing for first place in Grossmont Hills League play. It was the Foothillers who prevailed in that game with a 70-62 win that likely drained them emotionally and physically.

Steele Canyon established from the beginning that they were going to slow down the tempo with an offense that seemed to be more picky with its shot selection than Gordon Ramsay in a five star restaurant. They continued to pass the ball around the perimeter before taking shots, slowing the game to the point that it was conceivable that neither team would break into double digits by the end of the first quarter. 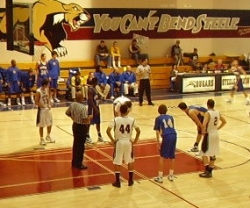 f scoring was more about the mistakes they made and less about the slow tempo of the game. Balls thrown out of bounds meant missed opportunities and as a result, the Foothillers trailed the Cougars 12-11 at the end of the first quarter.

In the second quarter, Grossmont seemed to wake up, going on a 10-4 scoring run that allowed them to take the lead. Jacob Haar scored the first two baskets to jumpstart the Foothillers, which went into the locker room at halftime ahead 25-19. He would finish the game with 11 points to lead both teams in scoring.

Even though the third quarter amounted to little more than an eight minute, 12-2 scoring run for Grossmont, the scrappy defense of Steele Canyon caused problems for the Foothillers. It was rare to see any Grossmont player throw, shoot or dribble without the action contested by a Steele Canyon defender.

Unfortunately for the Cougars, the offense could not capitalize on whatever opportunites their pesky defense provided. If they did not make the first shot attempt on each possession, they often came up empty. Grossmont's athleticism on rebounds did not allow many second chances for Steele Canyon to score. The result was a 37-21 Foothiller lead at the end of the third quarter. 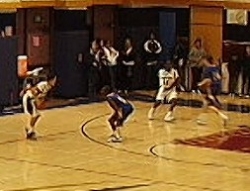 If you thought Grossmont had control of this game by now, think again. Steele Canyon came back to within nine points to close the gap to 45-36 late in the fourth quarter. What may have saved the Foothillers is that they built such a commanding lead in the third quarter that the Cougars didn't have enough time to make a comeback. It left the Grossmont players feeling more like a boxer who was saved by the bell than one who vanquished his opponent.

"We didn't play the best we could; we need to focus more," said Haar about the team's performance, "We didn't have our 'A' game tonight. We need to step it up at Valhalla Tuesday."

Hard luck Steele Canyon drops to 4-17 overall and 1-5 in league play. The schedule does not get any easier for them as they travel to Granite Hills (17-5, 4-1) to face the Eagles on Tuesday.

Christopher Mohr is a freelance writer in the San Diego area and is a Chargers, Padres and Detroit Red Wings fan.