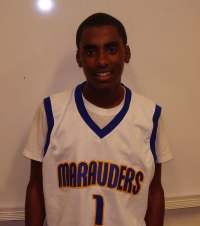 (San Diego) February 19 - A.J. Holloway drained a 16-foot jumper with five seconds left in the fourth quarter to give the host Marauders of Mira Mesa High School a thrilling, come from behind 46-45 upset win over the visiting Tigers of Morse High School Friday night. The shot capped off an incredible 17-4 run in the fourth quarter by the Marauders, who found themselves down 41-29 at the end of the third quarter.

Holloway described his game-winning shot: "When I came in the game, I told coach, 'I feel it! I feel it!' Coach put me in the game last second, had a great pass from my point guard, Jeff Bradley, I felt the shot, got underneath it, nothing but nylon!"

If Holloway's jumper provided the icing in the fourth quarter, then Jeff Bradley's performance provided the cake. He scored ten points in the final period, including two three-point jumpers. One came from well beyond NBA range and came just inches short of becoming a violation. After the shot initially bounced off the rim, it went almost straight up, and rested for a split second on the top of the backboard before rolling off and falling in the basket.

If the ball had continued to roll back off the top of the backboard and fallen behind it, the result would have been a violation and a turnover to the Tigers, and very likely, no last-second heroics for the home team.

Bradley's shot that fell microns short of disappointment turned out to be prophetic. A game that wasn't close for three quarters suddenly became a game of inches in the final minutes. This trend continued with 18.2 seconds left when Morse's Deonte Flowers was whistled for just being out of bounds. Flowers was dribbling along the sideline by the scorer's table trying to evade a crowd of Mira Mesa defenders when his foot grazed the sideline. The turnover set up the possession that would lead to Holloway's heroic shot. 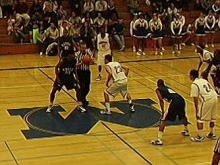 Morse did not have an answer to the late pressure put on by Mira Mesa's defense. Earlier, with 38 seconds left in regulation, the Marauders' defense prevented any Tiger player from getting open on a throw-in play. This forced Morse to use a timeout to avoid a five second violation.

As mentioned earlier, the first three quarters of this game belonged to Morse. Their defense did not allow Mira Mesa many good looks at the basket and their rebounding did not allow many second chance shots.

That's not to say that Mira Mesa's defense played badly, even though they fell behind by as many as 13 points in the third quarter. However, to give up 45 points against one of the top teams in the section; a team that averages almost 66 points per game like Morse does, is no small accomplishment.

The end of the game was not the first time that the Marauders overcame a large deficit. They closed a 10 point deficit in the second quarter when they went on a 10-2 run to tie the game at 16 with just over three minutes left before halftime. Morse responded with a 12-0 run to make the score 28-16 in their favor at halftime. Novian Cherry scored six of the Tigers' 12 points on that run before intermission.

Both teams scored 13 points in the third period, but the conclusion that many must have drawn was that Mira Mesa was simply trading baskets with Morse and that the Tigers were still in the driver's seat at the end of the quarter with a 41-29 lead. The incredible run by the Marauders in the fourth quarter was totally out of character with the rest of the game. 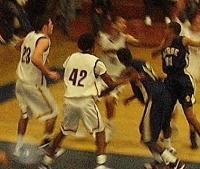 "We stuck with it and didn't stop competing, and that was the key. We got down, made a run the first half," Mira Mesa head coach Paul Tessaro said about the win, "we had a huge fourth quarter, and that was huge because we didn't start off the game very well. Just kept competing, competing, even though we were down, shots weren't falling, weren't running any type of offense. It was pure guts because I didn't draw that up, that's for sure."

With the win, Mira Mesa improves their record to 17-10; Morse drops to 21-8 with the loss, but closes out a very strong season. This was the final game of the regular season for both teams, which are no doubt eager to see who their next opponent will be as playoff pairings will be announced Saturday (2/20).

Christopher Mohr is a freelance writer in the San Diego area and is a huge fan of the Chargers, Padres and Detroit Red Wings.