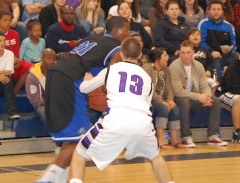 (El Cajon) March 18 - It was as if fans of El Cajon Foothills Christian High School boys basketball team had found the perfect wave, riding on the performances of seniors Troy Leaf, Kalob Hatcher and Jvonte Brooks. As anyone from California knows, waves don't last forever; you enjoy the ride while it lasts.

The Knights' wave crashed with their 78-73 overtime loss last Saturday night to the visiting Wildcats of Windward High School from West Los Angeles. The two teams faced off in a Division V state playoff game at Granite Hills High School. Only six weeks ago, the they both played each other on February 6 at the same location. That game was a high scoring thriller with the Knights winning 87-86. 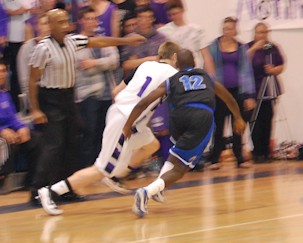 Among the many things that the Wildcats learned from that game is that they had to contain Leaf, the San Diego Section's all-time leading scorer. It's not realistic to expect a team to shut Leaf down, but by slowing him down just a little, the Wildcats helped their chances of winning tremendously.

Although Leaf's total of 25 points Saturday night might not qualify as slowing down to some, the total was three points below his average of 28 points per game. Almost half of his total came in the first quarter when he scored 12 points. That's when the Knights outscored the Wildcats 21-8 and the game seemed well on its way to a blowout for Foothills.

Windward turned things around in the second quarter with a 13-0 run that wiped out most of the Knights' early lead. The rest of the game would be evenly played with no team able to run away from the other. The Wildcats' defense slowed down Leaf's scoring significantly after the first quarter, never allowing him to score more than five points in any subsequent period.

Foothills had a 33-28 lead at halftime and maintained that margin when the third quarter ended with them leading 48-43. Windward was able to close that gap in the fourth quarter with the tremendous play of Nicholas Stover and Wesley Saunders. The two combined for 21 of the team's 22 points in the quarter.

Knights fans had to consider their team fortunate to have tied the game on two late free throws by Leaf, and that Windward's Jordan Wilson missed a last second jumper at the buzzer that would have won the game for the Wildcats. Instead, the game went to overtime tied at 65.

The overtime period was pretty much a contination of the dominant play of Stover and Saunders. The duo combined for nine of the team's 13 points in the deciding period; the Knights could only manage eight points after the shots would not fall for them. 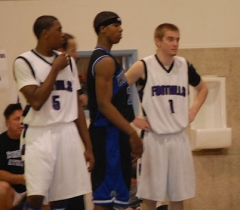 Leaf had foul trouble, picking up his fourth foul early in the second half, something the Wildcats thought they could take advantage of. "We definitely wanted to try and make him play defense and pick up that fifth foul, because we knew he was gonna just be--he wouldn't want to pick up the fifth foul, so he was not going to be as aggressive on defense. So we just wanted to try and exploit that and get to the basket on him and try to draw the foul, and if not then just go strong and make the layup," Saunders said about Leaf's foul trouble.

In addition to holding Leaf just below his average, another contributing factor to the Wildcats' win was their perimeter defense in the second half. After the Knights connected on four three-pointers in the first half, they were limited to only one in the second half. These were among the little things that don't seem like much, but when you win a close playoff game by five points, they all add up.

"No question, rebounding and not turning the ball over. The point wasn't us trying to outscore them; I think that was their objective, to try to outscore us, but us was more defense. I mean that's been our key the whole game, was playing defense--stopping Leaf, and getting [Brooks] off the boards and containing [Hatcher] at point guard," said head coach Miguel Villegas about why he felt his team prevailed. 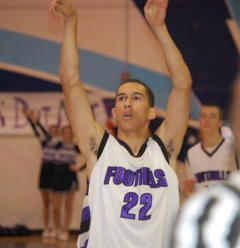 After having so much of their offense taken away by the Wildcats' defense, the Knights might not have stayed in this game if it weren't for the dominant inside play of Brooks. the 6'7" forward scored 19 of his 26 points in the second half, carrying much of the load for the Knights' offense when Leaf and Hatcher were not able to score from the perimeter.

Foothills' season ends with a 32-5 record. Leaf extended his record as the leading scorer in San Diego Section history, finishing out his high school career with 3,318 points. He will play basketball next year at UC Santa Barbara. Hatcher finishes as the all time leader in the state with 1,209 career assists and has the section record for steals. Brooks closes out a solid career with over 1,000 rebounds.

Windward (26-8) goes on to the Southern finals to face La Verne Lutheran (also 26-8) at Ontario Colony High School this coming Saturday. The winner of this game will go to Bakersfield on 3/27 to face the winner of the Northern finals, either Branson High School (Ross, CA) or University High School (San Francisco) and play for the state championship.