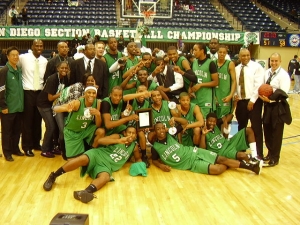 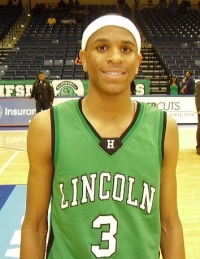 Neither team disappointed fans expecting displays of uncommon jumping ability. Chol and Dame Ndiaye each had dunks for Hoover, while Rasean Simpson and Norman Powell did the same for Lincoln. Maxey blocked shots by Hoover players that mere mortals would find unblockable. Players on both teams going for rebounds went up higher than the average Joe could get off a trampoline.

Although they came into the game as an underdog, Lincoln played like they were the favorites. They scored the first eight points of the game and did not allow Hoover to score until Chol finally got the Cardinals on the board with 4:35 left in the first period. Hoover had trouble breaking Lincoln's press and struggled with their shooting early on. As a result, Lincoln had a 19-10 lead at the end of the first period.

"I think the key was getting the rebounds and locking up, playing defense, playing hard defense and attacking the pass," Lincoln's Rasean Simpson said about stopping Hoover.

Lincoln's domination continued in the second quarter when Simpson scored six points and his teammate, Tyree Robinson, added five. Both players connected from three-point range while the stingy Hornet defense would not allow the Cardinals to get on track. Lincoln extended their lead to 17 points, leading 36-19 at halftime. 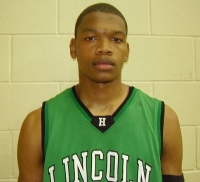 Both teams traded baskets for the rest of the game, forcing Hoover to foul to get the ball back. The free throw shooting of Tyrell and Tyree Robinson prevented any comeback for the Cardinals. The twin brothers each sank two free throws in the final minute to give Lincoln a 58-51 win and their first sectional championship since the school re-opened in 2007.

"We let them come back, not realizing what they could really do and the damage that they had, so they started coming back, but then we pulled ourselves together and we brought out the win," Maxey said about Hoover's last surge and Lincoln stopping it for the win. 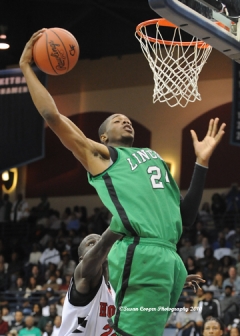 "We stopped their transition offense, for the most part. Nate Maxey did a great job on Chol, even though Chol got some points here and there, I think his play really bothered Chol, and our perimeter defense really shut down their perimeter offense," said Lincoln head coach Jason Bryant.

"I don't even know what to say right now, I'm just so excited," Simpson said about the sectional title for the Hornets.

Hoover drops to 26-6 with the loss, but their season continues with state tournament play. They face the Spartans of La Verne Damien High School (22-8) at home on Tuesday.

Lincoln improves to 25-2 with the win. They secured a second seed in the Southern bracket of the state tournament and will have a first round bye. Their next opponent will be the winner of the opening round game between San Pedro High School (20-10) and Fontana Summit High School (28-3).