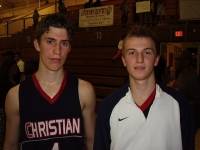 The game was a matchup of two contrasting teams. Christian came into this game with an impressive 14-2 record, which included wins over schools with much larger enrollments and winning records such as Mira Mesa and Poway. 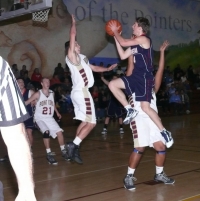 On the other hand, Point Loma had struggled to a 2-6 start. They were at a disadvantage since some of their players also played on the football team, which had an extended playoff run overlapping with the start of basketball season.

The Patriots started this game with a 15-2 run, aided largely by the shooting of Brazilian native Icaro Parisotto, who drained two three-pointers and added a two-point field goal, scoring eight of the Patriots' initial 15 points.

Point Loma then responded to Christian's initial surge with one of their own. They went on a 10-5 run to close out the first quarter with the score more respectable at 20-12 in the Patriots' favor. Nate George scored six of those points, enabling his team to stop the proverbial bleeding.

Unfortunately for the Pointers, the Patriots continued their torrid pace in the second quarter. This time another member of the team's international connection contributed. Zsolt Lakosa, a Hungarian native, scored nine points in the quarter to increase the Patriots' lead to 15 with the score 37-22 at halftime.

"I think we came out good, we shot the ball well, we played good in the first half," Lakosa said about the Patriots' fast start.

The shooting touch that allowed the Patriots to take such a commanding lead in the first half seemed to have stayed in the locker room for the second half, allowing Point Loma to outscore Christian 16-14 in the third quarter. Lakosa was the only player for the Patriots able to score consistently contributing 11 points. Christian led at the end of the quarter 51-38, but maintaining that margin had been anything but automatic. 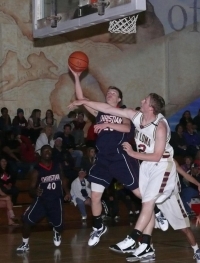 The Patriots slowed down so much to start the fourth quarter that the game began to look like the Tortoise and the Hare. Point Loma closed the gap to 51-43 early in the quarter and the home crowd became noisy, hoping for an upset.

The threat of a Point Loma upset soon fizzled out, however as Christian did just enough to hold on for a 64-53 win. Even though the Pointers outscored the Patriots again in the fourth quarter, 15-13, it wasn't enough to overcome the huge deficit from the first half.

Christian improved their record to 15-2 with the win. Lakosa led all scorers with 24 points; Parisotto had 20.

"I think sometimes in the second half we had a couple of mistakes; in the first half we were solid with the defense and offense too," said Parisotto about the game, "We need to work more on the defense."

Point Loma dropped to 2-7 with the loss. George led the Pointers' scoring effort with 12 points.

Christopher Mohr is a freelance writer in the San Diego area and is also a huge Chargers, Padres and Detroit Red Wings fan.