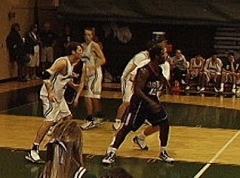 Whatever physical play the Islanders dished out however, wasn't enough to stop Christian from getting a 53-37 win, their 21st consecutive victory.

To most basketball fans, the ideal high school game looks something like this: a high scoring matchup with both teams each scoring 70 points, few fouls or turnovers, with a nice flow to the action. The image of famed track star Edwin Moses gracefully gliding over each hurdle on the way to the finish line makes a good analogy.

This game was a far cry f 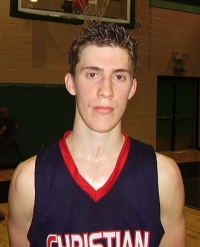 rom that ideal: the numerous aforementioned fouls, violations and turnovers made this game flow like dried molasses uphill. The best analogy would be the hurdler who bangs into each hurdle, falls on the ground several times and arrives at the finish line well behind Mr. Moses with several scrapes, bruises and contusions.

A look at the first three minutes of the game shows the inability of either team to get into a rhythm: two baskets, four fouls, a five second violation and several other violations such as balls thrown out of bounds and traveling to name a couple. This ugliness played right into Coronado's game plan to disrupt and slow down Christian and keep the score tight. So far the plan worked: the Patriots led only 11-10 at the end of the first quarter.

Christian's point guard Zsolt Lakosa put a little fire into his team with his play in the second quarter. He led off the period with a three-point play, and later added another three-point play and a slam dunk. The effort helped the Patriots go on a 19-8 run and take a 30-18 lead at halftime.

In spite of the deficit, the Islanders came out on fire in the third quarter with a 10-4 run. An ill advised foul occurred when Christian's Icaro Parisotto was fouled in the act of shooting a three-point attempt with just 29 seconds left in the quarter. Parisotto drained all three of the free throws awarded to him, allowing the Patriots to slow down the Islanders' surge and end the third quarter ahead 37-28.

This was a huge momentum shift for both teams. If Parisotto does not get fouled while shooting a three pointer, Coronado likely stays within six points of Christian with a chance to cut the deficit to three points before the third quarter ends. 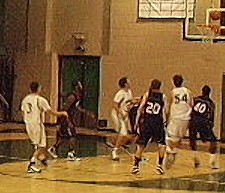 The Patriots continued to build on their nine-point lead in the fourth quarter on the scoring of Lakosa and two players, who up until now, had been shut out of the scorebook: Erick Allen and Shane Dillon. Unable to regain the momentum they had in the third period, the Islanders fell further behind and were forced to foul to try to get the ball back late in the game, but it had little effect on the outcome: a 53-37 Christian win.

Lakosa finished with 19 points to lead all scorers while Parisotto added 16 to account for the bulk of the Patriots' scoring. Justin Hebner led the way for Coronado with 11 points while his teammate Billy Schmitt added 8.

"Coach said just play physical, play real hard," said Lakosa about the game,"That's who we are, we play really hard defensively. On offense it's not as beautiful, but that's how it is."

The Patriots' defense did an impressive job, never allowing the Islanders to score than 10 points in any single quarter.

As mentioned earlier, Central League champion Christian extends their winning streak to 21 games with this win. Their record improves to 23-2 overall and 10-0 in league play. Their next game is at Madison (12-12, 7-3) where they will face the Warhawks.

Coronado drops to 17-8 overall and 7-4 in league play. They lost any chance at a league title with a 43-42 loss against Madison on Wednesday. Their next game is Tuesday at Kearny where they will face the Komets (9-12, 5-5).

Christopher Mohr is a freelance writer in the San Diego area and is a huge fan of the Chargers, Padres and Detroit Red Wings in spite of the grief these teams give him.

I think it the time to win Christian team is doing great work out there in the court . if you want to win you need to work hard that's the only rule to win.
motorcycle lawyer