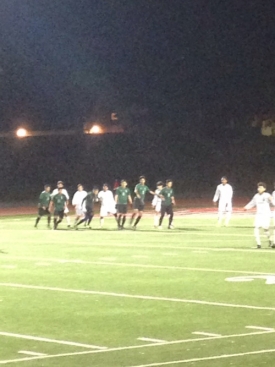 December 14, 2016 (Spring Valley) - Mount Miguel High School varsity boys soccer is off to a hot start in their 2016-17 campaign, their only loss being on Saturday against the Crawford High School Colts.  Tonight, the Matadors faced another San Diego Unified school, the Lincoln High School Hornets.

Lincoln got most of the scoring chances in the first half.  The Matadors had next to no chances.  The Hornets ultimately broke the ice in the 18th minute on a penalty shot by senior team captain Aldair Garcia Cortez to make the score 1-0 Hornets going into halftime. 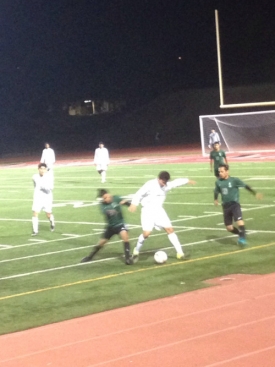 In the second half, it was the same story.  The Hornets came out attacking in the early going, controlled the ball and dominated on scoring chances and it paid off when senior Abel Machado struck the ball smoothly over the keeper’s head and into the half and Lincoln went up 2-0.  But this was no monumental feat for Mount Miguel's senior team captain Jose Gamez.  He scored two goals within a minute of each other to tie the game at two.  The Matadors had found their groove again.  But Gamez’s efforts were in vain.  Lincoln senior Guillermo Zavala broke the tie with a goal to put the Hornets back out in front 3-2.  They were able to avoid Gamez’s hot foot for the rest of the game, add an empty netter and hand Mount Miguel their second loss of the season, winning 3-2.

Next up for the Matadors before winter break is the Grossmont Tournament on Saturday.  They’ll square off against the Tigers of Morse High School.  Match time is set for 8:00 a.m.

Does your son/daughter play a sport at a level other than varsity?  Send a request to @ECMagSports on Twitter to have your child's game covered!