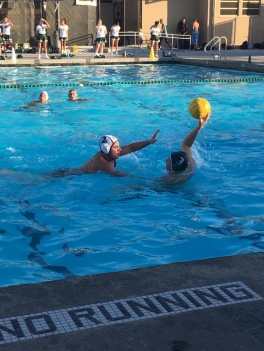 Does your son or daughter play a sport at a level other than varsity? Comment on this story or tweet @ECMagSports to request coverage!

September 27, 2017 (La Mesa) - It’s been a little cold the last few days, but it’s starting to warm up again and it’s perfect water polo weather as the varsity Santana Sultans boys--who are having an impressive season so far, sporting a 6-2 record (but 0-1 in league) made the trip to Helix to take on the Highlanders, who aren’t doing as hot at 4-7 overall and 0-2 in league play. 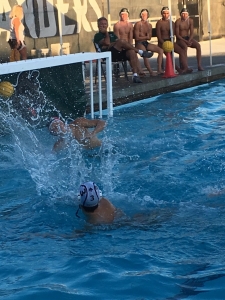 Though this game was a lot more contested than Steele Canyon-Monte Vista last week, the Sultans still struck first immediately and late in the first.  There was also a lot more defense than last week; the Highlanders found themselves stoned by Santana goalkeeping and thanks to that and good defense, the Sultans found themselves up 4-0 at the end of the first quarter.

Santana kicked off the second quarter with another goal.  A goal off the post and in gave the Sultans half a dozen.  The Scottie dogs finally got on the board towards the end of the half with a rocket goal, but the Sultans countered with another goal and another and a goal with one second left to go up 9-1 at the half. 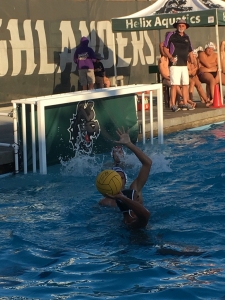 The Scotties kicked off the second half right with a goal.  In fact, everything changed for Helix in the second half; they defended better, played harder and got more scoring chances.  But by the end of the third, they lost their mojo as Santana stayed out in front, scoring two.  Helix tried to keep up, but Santana reached a dozen and more, ending the third up 14-3.

The Scotties tallied first in the fourth and started to mount a comeback in a big way as the Sultans were now the ones slipping.  Goals upon goals came for the Scotties, but despite the impressive comeback and holding the Sultans to no goals in the fourth, the Scotties still fell 14-9.  They’re now 0-3 in league play and 4-8 overall.  The Sultans move to 7-2 overall and even up their league record to .500 at 1-1.

Next up for the Highlanders is a trip to Valhalla for a game at 5:30 p.m. on Friday.  The Sultans are also back in action at home on Friday against the Ramona Bulldogs at 5:00 p.m. 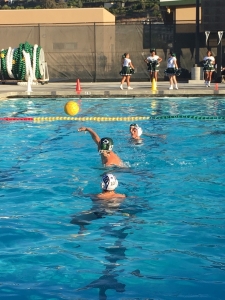