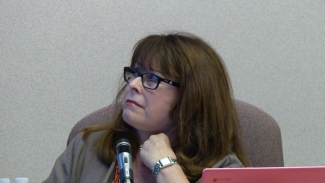 Photo: Priscilla Schreiber will be forced off the board in November if the county approves the GUHSD's redistricting proposal.

February 25, 2016 (San Diego’s East County) – Grossmont Union High School District voted 4-1 to ditch district-wide elections and break up the district into five areas that will each elect its own trustee. (View map)  The board also voted to ask the San Diego County Committee on School Board Reorganization to waive a requirement that would ordinarily allow the public to vote on redistricting.

District 4 includes Santee and the western portions of Lakeside.  Two current trustees, Priscilla Schreiber  and Robert Shield both live in this district. But since Schreiber’s term ends in November and Shield’s continues until 2018, Schreiber will be off the board and unable to run for election again until 2018.

Jim Kelly, whose seat is also safe until at least the 2018 election, will represent a vast rural swath  in District 5, which includes much of Lakeside and Barona in the north, east to encompass Crest, Harbison Canyon and Alpine, and south to include Jamul and other rural communities.

Schreiber has been the only advocate on the board for a new high school in Alpine. Of the trustees, only Schreiber has repeatedly asked pointed questions about seeming misuse of bond funds, lax oversight and other important issues. Marinovich has raised similar questions. The board majority’s decisions to ignore grand jury recommendations and refusal to either build the school or turnover funds to the adjacent Alpine union School District to do so resulted in a lawsuit filed by Alpine taxpayers and the Alpine Union School  District seeking to force the GUHSD to turn over bond money to build the school.

Can any redistricting plan that deprives a community of its elected long-time vocal advocate and replaces her with an opponent of the community's long-standing desire to build a school possibly be deemed fair by a court of law, particularly when the board's actions regarding that issue are now the subject of litigation?

Greg Barr, an elected trustee on the Grossmont Cuyamaca Community College District Board, stated, “I cannot understand mapping to exclude a current board member…Another criteria [in redistricting] should be to present duly elected members.”  He called the board’s motives “suspect” due to the Alpine High School litigation, noting, 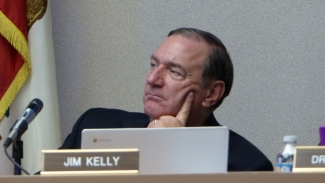 “Jim Kelly would be the representative for Alpine even though he opposes the high school there…Mr.. Kelly would not be representing the wishes of Alpine.”

Barring a recall election, however, Alpine voters will be stuck with Kelly (photo, right), despite his outspoken opposition to the Alpine high school, until at least the 2018 election.

Kathleen Hedberg, a Helix Water Board member, spoke as an individual voter who previously opposed changes to high school boundaries in the district. She said the board “lied” to her about accommodations for her daughter after moving her into “the wrong high school district” for the feeder school she attended.  She said she is “appalled” at the redistricting plan, adding, “Please go back to the drawing board.”

As an elected official herself, she noted that while populations must be roughly equal in districts, 10% deviations are allowed.  “Do the right thing, and make this work for your district,” she urged.

Hedberg also asked the board to allow the public to vote on redistricting and not seek a waiver.  “You guys spend a lot of our tax dollars without public participation and this warrants participation,” she asserted.

Lisa Stewart, a parent of a Monte Vista high school student, said she was surprised there are no maps showing where board members live. She also objected to parents not receiving information, but added that she believed the third option, a map based on feeder district, would be the best of the three options so that board members could have a “point of reference” with parents at feeder schools.

Ben Kalasho, president and founder of the Chaldean American Chamber of Commerce, said he has received “hundreds of phone calls” and requested to be included in drawing the maps to assure adequate representation for Chaldeans and other Middle Eastern people who are a “vital part of the community.”  He indicated there are “a lot of angry parents” right now and called for “tabling the process for more discussion” because “the Chaldean co munity can’t be forgotten.”  He said a lot of parents believe the board has been politicized. “The reason why I’m here is to ask to be included,” he added, noting that the Chamber has 500 members and 113 affiliates. 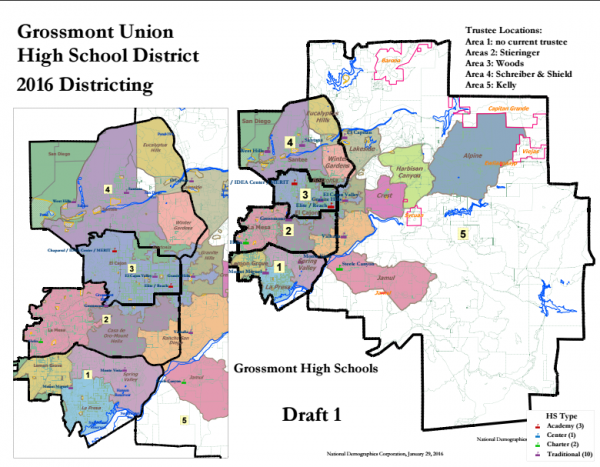