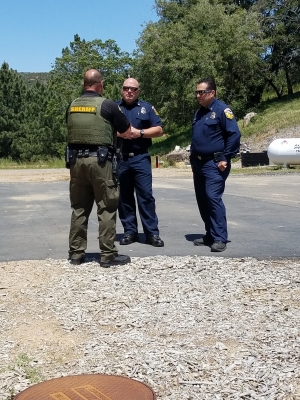 Update: Sheriff's office declines to comment on eviction of the JCFPD

June 3, 2019 (Julian) -- CAL FIRE, under the authority of the San Diego County Fire Authority, retook the remaining Julian fire station Sunday afternoon. The station  has been held by volunteers Julian-Cuyamaca Fire Protection District (JCFPD) with court approval after the Local Agency Formation Commission (LAFCO) dissolved the JCFPD, pending the outcome of litigation by those trying to save the county's last volunteer firefighting district.

The move by CAL FIRE and the Sheriff’s Department failure to halt the takeover was in defiance of an appeal filed to the San Diego Superior Appellate Court Division immediately after Superior Court Judge Randa Trapp on Friday ordered members of the JCFPD to vacate Fire Station No. 56 in her Friday ruling.  The appeal triggers an automatic stay, the County’s director of communications acknowledged Friday, prior to the forced takeover this weekend. Judge Trapp on Friday also affirmed that no eviction should occur until an appeal could be heard, according to a witness present in the courtroom. ECM is working to obtain videotape of the judge’s statement.

The motion to stay Trapp’s vacate order was filed by JCFPD attorney Cory Briggs, after the court released her judgment on Friday at mid-afternoon. It was also served to attorneys for the San Diego LAFCO Board of Directors, County Counsel Thomas E. Montgomery, and Craig A. Sherman, who represents the Julian Fire Company Association.

According to a reliable source who provided photos, CAL FIRE arrived at the station house at 3407 Highway 79, south of Julian’s town center at approximately 2 p.m. with several CAL FIRE employees.  A JCFPD member called the Sheriff and Deputy Ken Weber arrived. JCFPD Board of Directors Vice President Brian Kramer was told that Cal Fire was there to retake and change the locks on the station house on Judge Trapp’s order. 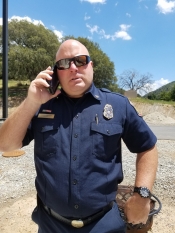 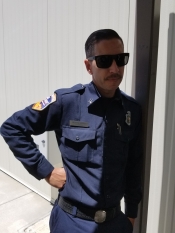 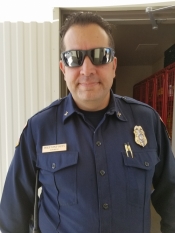 Kramer said that a stay was in effect and handed the appeal document to the deputy, who could not produce a copy of Trapp’s order. The locksmith then proceeded to change the locks. In photographs provided to ECM, three CAL FIRE employees, Battalion Chief Preston Fouts, Fire Chief Bud Sullins, and  Division ChiefTodd Phillips are identified as present.

JCFPD attorney Cory Briggs then spoke to Deputy Weber by phone but was unable to sway him to concede to the stay motion pending the Appellate court’s decision.

When East County Magazine asked for a comment on the alleged defiance of the Appellate Court Division order by the San Diego Sheriff’s Department on Sunday evening, Lt. Michael Rand declined to offer a comment until the incident was investigated by the department. Rand promised to contact ECM with an explanation on Monday.

The county’s decision to take over the fire station is in direct conflict of a statement from Friday to San Diego Union-Tribune writer Harry O. Jones by Michael Workman, the County of San Diego’s Director of Communication.

Workman said, “Although fire and sheriff’s officials had been preparing to go to Julian and evict the volunteers from the station late Friday afternoon, those plans are now on hold because of the appeal. The law provides that an appeal stays (the temporary restraining order issued by the judge) so we are directing the fire authority and sheriff not to move forward with removal at this time.”

ECM attempted to contact Workman early Sunday evening in light of Sunday’s county takeover of the building, but its phone call was not returned.

ECM reached out to Sheriff's media relations Sunday and Monday. Update: Late Monday the Sheriff's office advised us that it will not comment on these matters. Lt. Jason White deflected our request with this response:  "Media requests related to Fire station 56 are being handled by the County of San Diego Public Safety Group. You will need to send your requests there."  ECM  is reaching out to Public Safety Group but has not heard back.

In her original order, Trapp ordered the JCFPD to return to the county all keys to rooms and vehicles, logs of persons that have “occupied, possessed, or otherwise accessed Station 56 from April 8, 2019 to the present, within 24 hours, copies of all video recordings and photographs of all inspections, all payroll records, and restrained from operating any JCFPD property.

Significantly, Trapp ordered that the county may take possession of and secure all entrances to Station 56, and may post security personnel to guard the station. “Personnel from the San Diego County Sheriff’s Department shall have the right to enforce this order to secure the safety of Station 56 and all property and equipment therein,” the order also stated.

ECM Publisher and Editor Miriam Raftery and Contributing Editor Paul Kruze visited Fire Station No. 56 on Thursday, Mar. 30 to meet with concerned community members over the quality of medical care received from Cal Fire paramedics. Those interviews will be published shortly. The station appeared to be clean and well-maintained.

Trapp issued her vacate order after the County last week alleged that the JCFPD had “stolen” a JCFPD four-wheel drive fire truck. The County Fire Authority made an official complaint about the alleged theft to the San Diego County Sheriff’s Department (SDSO) but the Sheriff has not concluded whether any crime occurred.

NBC San Diego quoted Sheriff Lt. Justin White saying, "The County advised Deputies that the engine was missing and we are currently looking into the complaint. The Sheriff's Department has not completed a written crime report as of yet."

But as of Friday afternoon, the alleged “missing” fire truck was pictured parked in front of Station 56 by several San Diego media outlets.

A gag order issued by the court prevents Julian’s volunteer firefighters and board from speaking with media on matters in litigation. However, a Julian resident who asked not to be named has told ECM that the fire engine was taken in for scheduled repairs/maintenance in late March or early April, while the JCFPD was lawfully in charge, prior to any court orders handing control over to the County Fire Authority and Cal Fire.

The County has also defied an agreement made with Briggs that was hammered out as a compromise to allow CAL FIRE to make daily inspections of Station No. 56 provided that the County to pay JCFPD’s paramedics past due final paychecks.

ECM has learned that the paramedics who have still not been paid are set to file a lawsuit against the JCFPD and will submit a complaint with the U.S. Bureau of Labor.

Multiple sources have told ECM that one paramedic couldn’t pay rent due to the County withholding paychecks and is now homeless as a result, while other paramedics have also suffered financial hardships.

Thank you for being one of the few media people that will report the truth. This is a David and Goliath story happening here, a small town against giants such as the country of San Diego and the union of Cal Fire. What will they gain by a takeover of our small town? A good question to ponder. Thank you!
Your accurate and thorough reporting is appreciated.
At least history will remember that Julian was feisty about all of this! Being kind here, because sometimes an election is lost. That happened. It is nevertheless a legitimate question as to why the Sheriff went ahead in spite of the automatic stay? Judges do work on weekends, so is there something going on here that we don't know about yet? Stay tuned I guess.
Paul and Miriam, ECM is doing great work here! Donated!

If others wish to help they can donate here: http://www.eastcountymedia.org/donate (Note: fixed broken link from earlier)