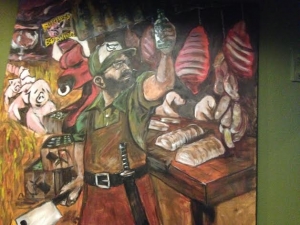 April 24, 2015 (Santee)--Some breweries are huge, some are small. Butcher's Brewing in Santee is a small microbrewery, however they serve nothing but big beers. 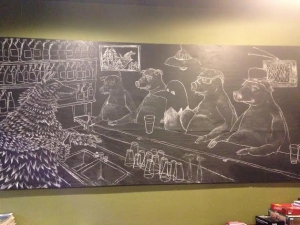 The tasting room has the feel of a truly urban microbrewery. A dark green room with a small bar and a few tables, featuring an assortment of board and trivia games, and a rock and roll satellite music channel playing on a small TV. There is nothing fancy about the place because all the focus is on the brews.

There is a large chalkboard, with some hand-drawn artwork of pigs drinking beer. On the wall hangs a painting presumably by the same artist. It depicts an Orwellian scene featuring a butcher holding a knife and hoisting a beer while the porcine proletariat march to their perceived fate. The butcher in the work bears a resemblance to the founder of the brewery, Rey Knight, who got his start on the chopping block and transferred his culinary expertise over to the beer scene.

Beer drinkers in Santee will be glad he did, here are some of the core beers that Butcher's keeps on draft:

Continental Stout - a solid oatmeal stout that has a creamy finish. It is not a rare occurrence at Butcher's to glance around the room and see many a stout has been poured.

Free Range IPA - hop-forward this beer has a unique personality that will please the India Pale enthusiast without question.

Old Sow Pale - crisp and hoppy; this is my personal favorite. It's a must order for those who appreciate Session IPAs.

Cream Ale - this is a great beer for the ale drinker with a sweet tooth. Arguably the finest cream ale to be brewed in East County.

Sari-Sari Pale Ale - a traditional pale ale this is a pallet pleaser. If you're an ale purist this may be your brew of choice as it is a classic.

Hubba-Bubba Hef - although the name sounds like bubble gum this beer is a true hark back to the European tradition in its style and presentation. Hefeweizen drinkers will be saying "hubba hubba" to Hubba-Bubba.

There is also a rotation of seasonal and experimental beers that are quite remarkable. At peak hours look for various food trucks, which serve an assortment of delicious plates to compliment the beer.

All of the beers are enjoyable, so getting a flight is a wise choice. Grab a growler or pickup a 22oz bottle if you happen to be in Santee.It is well worth the stop.

Small is the new Big at Butcher's Brewing.