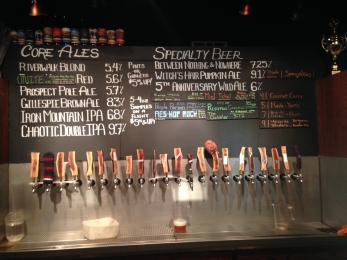 January 25, 2016 (Santee) -- Twisted Manzanita.  The name brings images of arid trails on East County hillsides. Hikes in our local backcountry can make one thirsty, and the tasting room at Twisted Manzanita Ales and Spirits is a great destination to cure that internal drought.

The tasting room in Santee is modest, but the beer is bold. A seating area meets a large bar, where some of the finest beer in East County is poured. Through the windows, one can watch as the brewers attend to their product.

Originally founded simply as Manzanita Ales, the company has only grown after applying the word Twisted to the name, culminating in a tasting room in Pacific Beach, which is popular with the beach crowd.  The original Prospect Avenue location has a lively crowd, and the bartenders are quick to recognize a familiar face.  There are also spirits available on site during limited hours.

The Specialty Brews that Manzanita cycles through its taps are simply fantastic. They often collaborate with other local brewers, and mix styles and flavors with marvelous results. Their hop-forward specialty beers are among the best in the county, making a trip to the tasting room a must for any hop lover.

Twisted Manzanita also has an assortment of year-round brews that are very traditional, a rarity in the San Diego scene. The Iron Mountain IPA, for instance, makes no claims of being a West Coast style brew.  The Prospect Pale Ale, is not dry-hopped, and the Chaotic DIPA is full bodied and direct. The Blonde, Brown and Red ales are very straightforward yet never lacking in flavor, aroma, or appearance.

With a watering hole like Twisted Manzanita Ales and Spirits on Prospect Avenue, and the majority of construction completed along that stretch of road, there is a great reason to hit the trail and head to Santee.