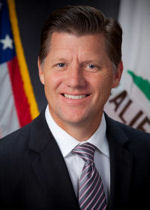 The Assistant Republican Leader works with the Leader to focus and frame the debate in Sacramento, assisting in articulating the Caucus' message and promoting policy.

Assemblyman Brian Jones represents the 77th Assembly District and is presently the Vice Chair of the Assembly Human Services Committee.  He also serves on the Assembly Legislative Ethics, Budget, Judiciary, and Water, Parks and Wildlife Committees, as well as the Select Committee on San Diego Trade, Tourism and Job Creation.  Before his election to the Assembly, he served as a Member of the Santee City Council.
"Brian Jones has distinguished himself as a true leader for Assembly Republicans, leading the fight to expose wasteful government spending by unaccountable bureaucrats," said Assembly Republican Leader Connie Conway, of Tulare.