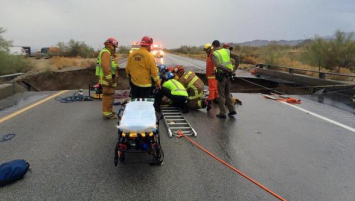 The bridge on eastbound I-10 was completely washed away and the westbound bridge was severely undermined.  A truck on the bridge when it collapsed plunged into the swiftly flowing water below.  A passenger escaped but the driver had to be rescued by firefighters who risked their lives to pull the motorist to safety.

Cal Trans has issued a commuter alert advising travelers to avoid travel on I-10 in the desert area, midway between Coachella and Arizona, until further notice.  Recommended detours include Interstate 8 through San Diego’s East County.

Interstate 10 is one of the largest roadways for hauling goods to regional ports, manufacturing facilities, warehouses and distribution centers.  The route between Coachella and Arizona along I-10 averages about 27,000 vehicles every day, according to Cal Trans.

Cal Trans reports that once damage assessments are complete, an emergency contract will be needed to make repairs to the interstate –repairs that will now be far more costly than if they had been done before the bridge collapsed.

There is no estimate yet for when the highway may be repaired and reopened.  Meanwhile, Cal Trans advises motorists traveling in desert areas to be prepared for storms, carry sturdy shoes, warm clothing, water, a charged cell phone, and assure that your gas tank is full.  Many motorists found themselves stranded, forced to turn around with no place to take shelter after Sunday’s bridge collapse.

Senator Stone says it’s time for California to take action to repair its crumbling infrastructure before the next tragedy occurs. Maintenance and repairs of California’s bridges and highways have been neglected far too long, he says, adding, “Millions of taxpayer dollars, approved by voters to build and maintain our bridges and highways, have been siphoned off to programs that have nothing to do with infrastructure, transportation or highway safety.”

Stone says he is calling on the Governor and Legislative Democrats to join with Republicans in supporting legislation that will ensure transportation dollars collected from California taxpayers are  spent where they are desperately needed.